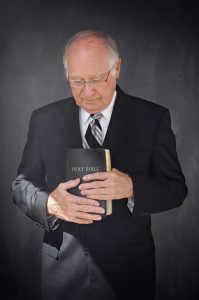 This paragraph was published in the Green Forest newspaper in May 1958:

He graduated from Green Forest High School in 1958 as the class Valedictorian. As a freshman he held the office of secretary-treasurer; and held the same office in the sophomore class. A 4-H Club member 4 years, secretary-treasurer of the club as a senior; a member of Who’s Who the 3rd and 4th years; FFA the first three years, treasurer of this group as a junior and a State delegate as a sophomore; school paper staff 3 years, as assistant editor his junior year and editor this year; art editor of the annual this year; Pep Club 3rd year and Commercial Club the last two years; president of the Glee Club and president of the Library Club his senior year.

After graduation from high school, he moved to Tulsa, Oklahoma and attended Tulsa University while working full-time. It was during this time that he met and married Lois and they began their family. He graduated from Tulsa University in 1972 with a bachelor’s degree in Accounting. He had begun his career in the mail room at Warren Petroleum in Tulsa and worked his way up the ranks through accounting to the executive suite. He worked through two mergers and retired from Chevon in 1997 after 38 years.

After retiring from Chevron, he worked at the family CPA firm, Peden & Associates, until his final retirement in 2012.

Throughout his life, he helped many not-for-profits. He helped start Reach Out America and worked many years at Hope Village. He always had a love for ministering to others. He never met a stranger and he never had an enemy.

William Earl Peden, Mr. Bill, Bro. Peden, or Papa was many things to many people. Son, brother, nephew, husband, father, uncle, father-in-law, grandfather, great grandfather, and friend. He was a man of great love and great laughter. His life revolved around his church and his family. Bill and Lois were always together. You never said Bill or Lois, you always said Bill AND Lois. Above all, Bill loved Jesus Christ, his church and his family.

He was an active member of Greater Life Church in League City, Texas.

He occupied himself with many hobbies, most of which revolved around all manner of livestock, from exotic fish to English bulldogs, swans, migratory waterflow, pheasants, cattle, horses, goats, and chickens. His yard was his pride and joy, and if you never saw his azaleas in full bloom, you missed out.

Condolences may be sent to the Peden family in care of Jeter Memorial Funeral Home at www.jeterfuneralhome.com