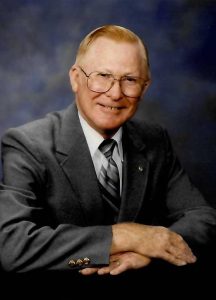 William (Bill) Richard Kelly, 89, of Friendswood, Texas passed away peacefully on February 1, 2021.  Bill was born on December 13, 1931 in Atlanta, Georgia to parents Ella Maie and Philip Kelly.  He was raised in Atlanta, Georgia and moved to Memphis, Tennessee as a junior in high school and graduated from Messick High School in 1949 where he played baseball and participated in ROTC.  Bill was awarded a full Navy scholarship at Georgia Tech University where he participated in their Naval ROTC program.  He graduated with a degree in Industrial Engineering from Georgia Tech in 1953.  Upon graduation he was commissioned an ensign in the Navy and assigned to Naval Flight Training in Pensacola, Florida.  He received his wings in September 1954 and served a 2-year tour of duty with Fighter Squadron 54 operating out of Miramar Naval Air Station in San Diego, California.  While at Georgia Tech he met the love of his life, Carolyn, on a blind date to a Navy Ring Dance and they were married on June 25, 1955.  After an Honorable Discharge from the Navy in September 1956, Bill accepted a position with General Electric as a Jet Engine Test Engineer in Cincinnati, Ohio where he also obtained an MBA from Xavier University.

Bill and Carolyn moved to Texas in 1962 where he began his career with NASA in the Mercury and Apollo program offices.  He held many Director positions with his last being Director, Administration.  Bill retired from NASA after a 32-year career in June of 1994.  He won many awards (too many to mention) including the NASA Exceptional Service Medal, Outstanding Leadership Medal, and the Presidential Rank Award for Meritorious Executive.  One of Bill’s proudest achievements was pioneering the creation of Space Center Houston working with Walt Disney Imagineering to bring this project to life.  He served as Chairman of the Board for Space Center Houston for many years.

Bill had a successful career at NASA, but his life truly revolved around the church and his faith.  He joined Friendswood United Methodist Church in 1964 and probably served on every committee of the church at one time or another.  Bill organized many golf tournaments, blood drives and was a friend in faith to many!  Bill had a servants heart and was dedicated to loving and helping other people. He loved visiting people in the hospital and actively gave his time to many organizations including Hope Village, Innovative Alternatives, The Gideons International, United Way, and Boys and Girls Clubs of America to name a few.

Bill and Carolyn raised three daughters and enjoyed their 8 grandchildren and 8 great-grandchildren. Bill enjoyed playing golf, Vegas trips with his daughters, and never missed a child or grandchild’s activity.  He was their biggest fan.

There will be a memorial service held at Friendswood United Methodist Church, 110 N. Friendswood Dr., Friendswood, Texas 77546  on Friday, February 5, 2021 at 11:00 am with visitation for visitors beginning at 10:00 am.  There will be social distancing and masks will be required.  The service will also be live-streamed, and the link will be available at FriendswoodMethodosit.org. There will be a private family burial at a later date.