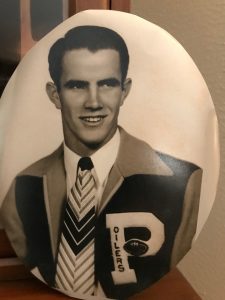 Walter Herbert "Herb" Alexander of Alvin, Texas went to his heavenly mansion on Saturday April 18 ,2020 after reaching the age of 86 years old. Herb passed peacefully in his home in Alvin, Texas with his beloved wife Phyllis by his side.

Herb was born on June 1, 1933 in Conroe, Texas to Ramah Alexander and Leston Alexander. Herb graduated from Pearland High School in 1951 with 13 students in his graduating class. He often joked that he graduated in the top ten of his class. Herb then moved on to attend the University of Texas and Sam Houston State University for a year and a half before bravely enlisting in the Army in 1954. In the Army he was a Radar Instructor where he served at the end of the Korean War before being discharged in 1956. Herb retired from Monsanto in 1985 and started a lawn maintenance business for 5 years. He then worked for Betz Water Management for six years before retiring. Herb enjoyed coaching Little League Baseball and Little League Football. He was present in attending all his children and grandchildren's sporting games.

Herb loved to travel and enjoyed anything water related. He also loved living at the Frio River where he and his wife Phyllis built a home in 2000. Herb's last big trip was on an Alaskan cruise where he went with his wife and friends. Herb enjoyed working in the yard, listening to classic country music, woodworking, and dancing.

Herb was a kind, quiet and patient man who devoted his life to family and God. He will be loved and missed by many.

His family would like to give special thanks to his caregivers at Seasons Hospice and his wonderful medical doctors who kept him with us for 86 wonderful years.

Due to nationwide circumstances, a celebration of Herb's life will be held at a later date.