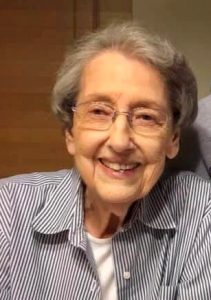 Virginia Ann Albright (Colston) died peacefully on May 1, 2020 in Webster, TX. She was 88 years old and surrounded by family at the time of her passing.

She was preceded in death by her parents, Lyle Colston and Lois Colston (Waddle), her older brother Charles Robert (Bob) Colston, and her older sister Dorothy May Alpers (Colston).

Virginia was born on February 28, 1932 in Van Horne, IA. Growing up in a musical family, Virginia learned to play the drums at an early age and she eventually became part of the Colston Family Band, alongside mother Lois on piano, brother Bob on trumpet, and sister Dorothy on saxophone. Together, this talented quartet provided musical entertainment at social gatherings in and around their hometown of Vinton, IA.

Subsequently, Virginia graduated from Vinton High School in 1950 and Gates Business College in Waterloo, IA in 1952. Afterward, she went to work for Taken Brothers and Mosher and Mosher, Attorneys at Law. She also married her husband Ray in January 1953 following his service in the United States Marine Corps.

Upon Ray's completion of an undergraduate degree in education at the Iowa State Teachers College in Cedar Falls, IA, the couple moved to Knoxville, IA in 1956 where Ray taught at Knoxville High School and Virginia worked for the Maytag Company in Newton, IA, serving as an executive assistant to one of the senior vice presidents.

Then, they moved to Bettendorf, IA in 1966. While Ray was teaching at Williams Junior High School in Davenport, IA and subsequently began working at International Harvester in East Moline, IL, Virginia gave birth to son John in February 1967. Years later, after devoting her life to family pursuits and remaining active with St. Peter's Episcopal Church in Bettendorf, IA, she went back to work at Bishops Cafeteria in Bettendorf, IA in 1984, serving as a cashier, dining room hostess, and bookkeeper until the restaurant closed and she retired in 2003.

Finally, they moved to Friendswood, TX in 2008 to be near son John, who was working as a NASA engineer at the Johnson Space Center in Houston, TX, and their two grandsons, Andrew and Evan. During this period, she spent many hours helping both boys with schoolwork and attending their various sporting, music, and academic activities from elementary school through high school.

At the time of Virginia's passing, the Lord welcomed her into Heaven, where she was reunited with her parents, siblings, and many lifelong friends. Her spirit will remain with husband Ray, son John, grandsons Andrew and Evan, and all other relatives and friends whose lives were impacted so profoundly by her presence on this Earth.

A private ceremony honoring Virginia's life will be held at Good Shepherd Episcopal Church in Friendswood, TX on May 8, 2020. Her burial will occur at a future date at the Rock Island National Cemetery located within the U.S. Army's Rock Island Arsenal near the city of Rock Island, IL.

In lieu of flowers, donations in the name of Virginia Albright can be made to the Houston Food Bank at www.houstonfoodbank.org or any other local food pantry.

Condolences may be sent to the Albright family in care of Jeter Memorial Funeral Home at www.jeterfuneralhome.com.