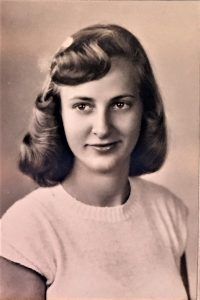 Verla Pickett Perry was born on October 23,1931, the oldest of 11 children of Caryl and Mildred Pickett. She was born on a farm three miles North of Rose Hill, Kansas. From an early age she worked on the farm and drove farm equipment even though she had to stand up to reach the clutch and pedal.

In 1949, Verla graduated from Rose Hill High School. She went on to attend Wesley School of Nursing in Wichita, Kansas, graduating in 1952. She met Harold Perry, who was studying at Friends University in Wichita, and they married in Rose Hill on July 19, 1952. Verla continued working as an RN in Kansas until 1955, when they moved to Harold's hometown of Friendswood, Texas. Verla and Harold raised five children, Donna, Leslie, Janis, Lou Ann and Ardith, who all graduated from Friendswood High School and went on to earn college degrees.

Verla continued her nursing career in Texas until she retired in 1987. She and Harold were active in Friendswood Friends Church, and each especially enjoyed singing in the church choir for many years. Verla was a skilled seamstress, baker, gardener, and beekeeper. An avid quilter, she began "The Bee Pieceful Quilters" quilting group, where she taught and spent many happy and productive hours with fellow quilters.

Verla and Harold were active members of the Friendswood Historical Society. Harold and his sisters, Helen Perry Dawson and Esther Perry Kellum, gave the home of their grandparents, Nathan and Mary Perry, the first pastors of the Friendswood Friends Church, to the Historical Society and together donated over 3,000 hours working on the restoration of the home. The Perry Home was built in 1901-1902 from timber felled by the catastrophic Galveston hurricane of 1900. The home is the oldest original building standing in Friendswood and is now The Perry Home Museum. The Perry Home contains many of its original furnishings and stands adjacent to Friendswood Friends Church.

After their retirements, Verla and Harold became travel enthusiasts and traveled to all the states in the continental US and to many countries North, South, East and West of their home.

In lieu of flowers, the family suggests that gifts be made to the Friendswood Friends Church or to the Historical Society of Friendswood. Due to possible dangers posed by the pandemic, a memorial service officiated by Pastor David Bridges will be conducted by Zoom. For an invitation to the Zoom memorial service, please send your email address to louannperry@gmail.com.

Condolences may be sent to the Perry family in care of Jeter Memorial Funeral Home at www.jeterfuneralhome.com.