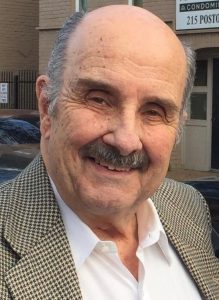 Steve Francis O' Donohoe Jr., resident of League City, Texas entered the pearly gates of heaven January 10th, 2021 at the age of 81. Throughout his life, and to the day the angels escorted him to heaven, Steve truly epitomized his favorite verse, Jeremiah 29:11 "For I know the plans I have for you," declares the Lord, "plans to prosper you and not to harm you, plans to give you hope and a future." Steve not only allowed the Lord to guide every step and plan for his life, he also never met a stranger and allowed God to work through him to help guide others in their steps. His optimism for each day God gave him on this earth was contagious to all the lives that were blessed to be graced with his bubbly and bright disposition.

Steve- O was Born January 26th, 1939 in Galveston, Texas to Steve Francis O'Donohoe Sr. and Jewel Ruth Goode O'Donohoe at St. Mary's Hospital. He graduated from Ball High in 1956 and went on to attend Texas Lutheran College in Seguin, Texas majoring in broadcasting.

In 1958, he followed his calling and became a successful radio disc jockey at KPAC radio station in Port Arthur, Texas. He continued on in radio broadcasting throughout east Texas, Louisiana, and Houston and quickly became the most popular radio disc jockey in southeast Texas in the 1960's. To his many fans and faithful listeners, he was known as "Steve-O The Night Rider "and in November of 2020, he was inducted into the Texas Radio Hall of Fame.

On August 4,1965, he married his biggest fan, not just in radio, but in life. Bennie Marie Wilcox & Steve had 3 beautiful girls: Kristi, Shanna and Mandy.

At the age of 33, while picking up his daughters from school, Steve-O suffered a massive heart attack in the parking lot of St. Patrick's Church. He called out to God "If You let me live, I will live for You". God granted Steve-O his healing that day, and Steve chose to showcase his unwavering faith to Jesus from that day on.

Aside from being Steve- O The Night-Rider, Bennie's soul mate, and the best girl daddy, Steve-O's favorite role was being "Poppy" to his 9 grandchildren & great-grandchild, and many other beloved friends Poppy treated as his own. Steve always made room in his big heart for loving the many people God sent his way and treated them all as if they were family.

Steve-O made good on his promise to Jesus and in 1982 he began his pastoral career by founding and pastoring Sagemont Full Gospel Church.

He went on to use his God-given pastoral talents at Grace Community Church in Houston where he served as a Pastoral Care Pastor for 15 years and met some life-long friends along the way. For the next 7 years, he served at Life Point Church where he then retired in 2014. Post-retirement, Steve became a board member and elder of Refuge Mission Church in League City.

Services are scheduled for Saturday, January 16, 2021 at Grace Community Church, 14505 Gulf Freeway, Houston, Texas 77034 in the main sanctuary. The visitation will begin at 8:30 A.M. followed by the funeral service at 9:30 A.M. Face masks are required until seated. The main sanctuary is large and has freedom for everyone to be spread out due to covid. The burial will follow the service and will be at Forest Park East Cemetery, 21620 Gulf Freeway, Webster, TX 77598.

In lieu of flowers, if you would like to make a donation, please consider giving to: Refuge Mission Church 4889 West Main Street, League City, TX 77573.

If you do want to send flowers, please send to Jeter Memorial Funeral Home.

Condolences may be sent to the O'Donohoe family in care of Jeter Memorial Funeral Home at www.jeterfuneralhome.com.