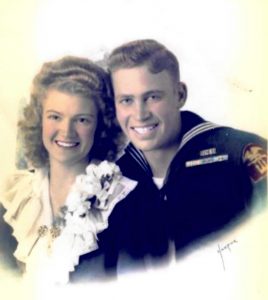 Sterling Baker ended his earthly watch and was called home by God on June 24th, 2021.  He was born in Dittlinger, Texas, on October 12th, 1924, to Marie and George W. Baker.  Sterling entered and began to impact the world from an early age.  He did it his way until the very end.

Great joy and significance surround the twenty-fourth for the Baker Family and those touched by Sterling’s life.  In 1933, he was baptized on the 24th, choosing life by declaring his decision to follow Jesus. This decision helped mold him into the man he was to become.

After leaving home at the age of fourteen, Sterling wound up at a National Youth Administration (NYA) camp at Inks Lake. There he met a man who would change his life and give him a second family.  Dr. Jack Rhodes altered the course of a runaway and helped him become a true model of a man.

A few years into their newfound friendship, news of Pearl Harbor would drive Sterling to sail off and win the war.  So, he joined the Navy as a seventeen-year-old and started volunteering for everything that would come his way. This volunteer attitude led him to join the first class of The Amphibious Scouts, a forerunner of today’s Navy SEALS.  When a torpedo hit his ship, the mission changed, and he spent the rest of his naval career serving aboard the USS Almaack.

He served his country faithfully from 1942 through 1945 and was honorably discharged as he started his new family.

His faith led him to the next most crucial earthly decision, marrying his beloved wife, Doris Gilbert, on June 24th, 1945. Together they raised three girls from birth and many more as they came into the Baker home. From their early married years until the very end, their commitment to each other and their family touched and inspired many lives.

By their sixtieth wedding anniversary, a total of five couples, inspired by Doris and Sterling, stood up and exchanged vows on the Twenty-Fourth of June. Sterling and Doris’s commitment to each other and their family touched and inspired so many lives.

With his time in the war over and a new family to take care of, the oil field came calling to offer a career. After some hard work and too much time away from the family, Dr. Rhodes convinced him to go to the University of Houston and become a night watchman and attend school.

Sterling earned his bachelor’s in science after never completing grade school. In addition, he earned a permanent teaching certificate. Sterling spent twenty years in the University of Houston Traffic and Security Department. There he helped it grow into a full-fledged Police department where he served as the first certified Chief.

In the late 1950’s he created a proposal that helped in the formation of what would become the International Association of Campus Law Enforcement Administrators.

After his time at the University of Houston, he continued his career at the University of Missouri before retiring from law enforcement.  Upon returning to Houston, he began work rebuilding engines developing a trusted name in the automotive industry.  Among all of these adventures and firsts, he became an avid bowler, achieved nine perfect games of 300, and competed and medaled in the Senior Olympics.

Condolences may be sent to the Baker family in care of Jeter Memorial Funeral Home at www.jeterfuneralhome.com.