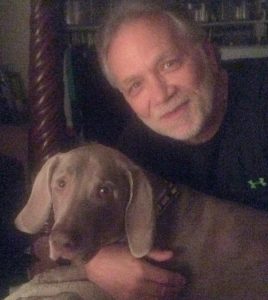 On August 5, 2020, Steve Canull went to sleep and took his last breath with Kathy, his wife of 38 years, by his side.

Steve was a good guy, a protector, and a mentor with a very tender, loving heart.  He never met someone who did not become his friend, and he had a special gift for making others feel great about themselves.

On December 10, 1957, in Fort Worth, Texas, Steve was born to Edward and Geraldine Canull, both of whom predeceased him. Along with his older sister Gail, the family lived in New Mexico, North Dakota and Mississippi before settling in Friendswood, Texas.  As a teenager, Steve sadly lost his dear mother. However, when Edward married Jane Walker, Steve gained a supportive and loving friend as well as two fun sisters, Gay and Julie.

Speaking fondly of his childhood, Steve told of days spent outdoors hunting frogs, snakes, and alligator gars in the rice and oil fields of Friendswood.  He rode horses, bicycles, dirt bikes, motorcycles, go-karts­…anything that moved, and moved fast! Summertime was spent on the family farm in Illinois or camping with the family. This adventurer fished in oceans, lakes, and creeks and had tails/tales to match!

Steve's love of sports began at a young age and continued throughout his life.  Whether it was football, tennis, bowling, trick diving, remote control car racing, or hunting and fishing. Steve was always game for a new adventure. Golf was his passion, and he worked at a golf course for a while easily improving his handicap. His favorite football memories were of his high school days when he excelled as a running back for the "Fighting Mustangs".  Steve played every game to win and was referred to as "Blue Blaster" by the local newspaper.

After graduating from Friendswood High School in 1977, Steve married the love of his life, Kathryn "Kathy" Kilbourn, in 1982.  They made their home in northwest Houston with a succession of faithful Weimaraner dogs, while creating a close-knit community of neighbors who became steadfast friends.

As driven in his career as he was in sports, Steve constantly challenged himself, learning everything he could and demanding excellence.  He was skilled in many building trades from foundations to roofs.  There was nothing Steve could not build or fix. Steve also spent many hours tending his forestry acreage in Waller County. The family who eventually purchased the property became Steve's close friends, as was his way.

Stephen is survived by his wife Kathryn, his mother Jane Canull, sisters Gail Shook, Gay Hill and Julie Olson, brother-in-law John Kilbourn, sister-in-law Kristen Phillips and her husband Michael. Many beloved nephews, nieces, great-nephews, and great-nieces remember him fondly. Carol Kilbourn, Steve's dear mother-in-law, predeceased him. The family wishes to express deep gratitude to Steve's father-in-law, Max Kilbourn, and all of the friends and family who prayed and cared for Steve during his brief and valiant battle with cancer.

"I have fought a good fight. I have finished my course. I have kept the faith."  2 Timothy 4:7