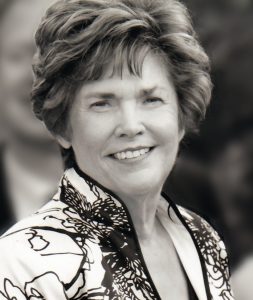 It is with great sadness we announce our mother, Sondra Fleming Robb died on April 19, 2020, after a tough battle with Alzheimer's disease.  She was born March 22, 1939 in Shreveport, Louisiana to John Beverly Fleming and Kristine Longshore Fleming Smith. Sondra grew up in Shreveport, attending CE Byrd High School before moving to Houston, Texas after graduation from high school.

She lived in Pasadena, Texas for over 50 years. Sondra and her husband Doug were among a group of families that founded the Houston Chapter of the Juvenile Diabetes Research Foundation Houston. She was a fierce advocate for diabetes research throughout her life.  Sondra devoted many service hours to special needs children as a member of the Pasadena Bay Area Junior Forum.  She was proud of her city and was actively involved with The Pasadena Chamber of Commerce, Pasadena Sesquicentennial Committee, and Pasadena Beautification Committee. Sondra loved animals and was one of the founders of The Pasadena Pet Adoption Program. She was a tireless fundraiser for all of her charitable interests; and, as many individuals and businesses in Pasadena can attest, she seldom left empty handed.

Sondra was preceded in death by her husband, D. Douglas Robb III, and her parents. She is survived by her three children: Douglas Robb, Stacy Brazzel and husband Butch, Kelley Robb Brown and husband Steve. She is also survived by her sister, Louise Cass, and her six beloved grandchildren, Riley and Reece Robb, Blake and Bryce Brazzel, Ella and Audrey Brown.

In her later years, Sondra found her greatest happiness in her grandchildren. Spending quality time, attending ball games, and spoiling them were her top ambitions. She could never sit still, as she enjoyed traveling along with going to dinner, concerts, and movies with friends and family.

Her family thanks her amazing group of caregivers at the Cottages at Clear Lake, especially Heidi, Sandy, Laura, Kristel, Nanie, Jonika, MaryAnn, Isabel and Vanessa. We are blessed to have had an amazing group of friends and extended family that have been our support through her last three years.

The family will hold a private graveside service at Forest Park Lawndale in Houston, Texas. Family and friends are invited to a memorial ceremony to be held at a later date. Should friends desire, donations may be sent in Sondra's memory to the Nantz National Alzheimer Center at Methodist Hospital, P.O. Box 4384, Houston, TX 77210-4384.

May her spirit, spunk, and tenacity remain in our hearts always.

Condolences may be sent to the Robb family in care of Jeter Memorial Funeral Home at www.jeterfuneralhome.com.