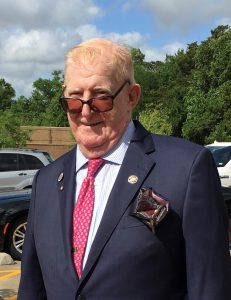 Sergeant Robert Frederick Burns, 86, went to live with his heavenly Father on July 8, 2021, at Methodist Hospital in Houston Texas.

Named after his mother's favorite brother, Robert was the devoted son of the late Laura Brown Klein and Addison Burns. Robert was born on July 21, 1934, in Rensselaer NY where he spent most of his life before moving to Texas in 2009.

As a young man he attended school at St. Johns where he sang in the church choir. He later attended school in Rensselaer where he excelled in basketball and charming the girls. He spent his summers at his grandmother McDaniel's camp at Lake Lonely where he loved to fish.

In July 1952 Robert enlisted in the United States Marine Corps and completed boot camp at the Marine Corp Base Camp Lejeune, N.C. He was later stationed in Germany until 1955.

After his discharge he moved back to Rensselaer where he married his high school sweetheart Adrienne Wolfe, bought a house on 9th Street and started a family. He secured a job at Sterling Winthrop and worked there as technician for 45 years until his retirement.

Affectionately known to his numerous friends and neighbors as "The Mayor of Ninth Street" Robert was a faithful and beloved friend to all. He loved to garden and spent much of his time outdoors tending his tomatoes and hydrangeas. He loved animals of all kinds. No one will ever know how many dogs he "adopted" over the course of the years. He often brought home stray dogs and cats as a boy and his compassion and love for animals lasted a lifetime.

After moving to Texas, he joined Mary Queen Catholic Church and faithfully attended Mass every Sunday with his son Robert.

For those who knew and loved him, he will always be remembered as the sharp dressed man in the suit and fedora who was inclined to burst out in song or cut a rug with the ladies at a moment's notice.

He never met a stranger and his jacket was always well stocked with a pocket full of mints and a pocket full of dog biscuits to share with his friends. He is remembered fondly by his children and grandchildren for his jokes and stories. You never knew what he was going to come up with next.

Condolences may be sent to the Burns family in in care of Jeter Memorial Funeral Home at www.jeterfuneralhome.com.