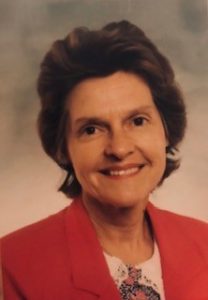 Sally was born on November 13, 1936 in Wharton, Texas to Jones Allen Mays, Jr., and Marjorie Pearson Mays.  She graduated from Lamar High School in Rosenberg before attending the University of Texas at Austin, where she obtained her bachelor's degree in Home Economics. Following her time in Austin, Sally went on to earn a master's degree in Education from the University of Houston in 1961.

After college, Sally moved to Alvin, where she started her 42-year career in teaching and administration.  She began her career teaching Kindergarten and taught in the Alvin and Pearland school districts. Sally's dedication went beyond the classroom when she served as the Assistant Principal for Alvin Elementary School and Alvin High School from 1985-1997.  After retiring in 1997, Sally continued to substitute as a principal for seven additional years.

Outside of work, Sally was an impressive pilot who flew around the US after receiving her pilot's license in 1984.  Her favorite flight was the final trip she took in her husband Don's plane to Alaska. She and Don continued to travel the world, visiting everywhere from China, Russia, Europe, Japan, Egypt, and Israel to Canada, Mexico, Central America, and South America.

As if flying and traveling weren't enough, Sally was also an avid reader.  The binder she kept of all the books she had completed showed that Sally read more than 60 books a year.  Her favorite book was the Bible which she read in its entirety in 2009.

Faith was important to Sally. As a life-long member of the Methodist Church, she enjoyed teaching Sunday school and playing the organ. After she retired, Sally volunteered at the First United Methodist Church of Friendswood, the Friendswood Public Library, and Hospice.

In lieu of flowers, the family requests that any gifts be sent to the First United Methodist Church of Alvin or be sent to your local church, or Heifer International which was one of her favorite charities.

A family service will be held at a later time.

Condolences may be made online in care of Jeter Memorial Funeral Home.