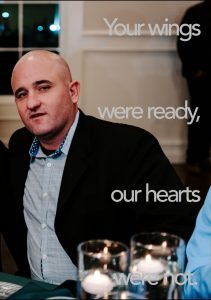 With profound sorrow, we announce that our most beloved son, brother, family member, and friend Ryan William Magee, age 38 has passed away suddenly at his home in Alvin, Texas on June 27,2020 from pancreatic complications.

Ryan was raised in Friendswood, Texas and actively participated in many school groups and activities over the years. He loved playing baseball and soccer as a child and grew up a huge Astros fan. He always bought souvenirs for his family and friends. After graduating from Friendswood High School, he enrolled at Sam Houston State University. However, his priorities changed upon learning that his beloved mother was diagnosed with terminal cancer. After the passing of his beautiful mother, he acquired an enjoyable job in aviation, to which he fully intended to return. Instead, over time he felt called to transition to a job working with his cousin in chemical plants until his passing.

Ryan accepted Christ, served God with his whole life, and actively worshipped at his church, The Harbor Church in Friendswood, Texas. His family, friends, and coworkers meant the world to him. He lived to love and serve others, always selflessly putting others first. He was everybody's best friend. He was compassionate, unmaterialistic, a peacemaker, generous, kind, valued simplicity, and was always right there when others needed him. Ryan loved all children, especially those of his family and friends. He was also child-like in nature and enjoyed spending time with everybody's kids, making them laugh, and giving them gifts. At work, he was a dedicated leader. He was great at motivating his coworkers, brightening their day, and keeping them entertained with his witty humor and pranks. He was also a very talented singer. He could sing in any style and had a strong passion for music. Ryan truly lived life to the fullest. He is deeply loved by everyone who knew him, and his memory will be cherished forever.

The Magees and extended family would like to thank everyone who expressed their love for Ryan and his family. They are deeply touched and grateful for the support they have received from everybody. Because of these friendships, the family feels blessed beyond measure.

Condolences may be sent to the Magee family in care of Jeter Memorial Funeral Home at www.jeterfuneralhome.com.