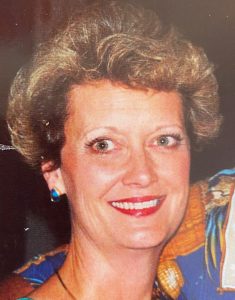 Ruth Ann Neves Baughman, 70, passed away on Sunday, February 21, 2021.  She was born June 24, 1950, in Galveston, TX.  She grew up in Alvin, TX, with her parents John and Ruth Neves.  After graduating from Alvin High School, she graduated from The University of Texas at Austin.

Ruth Ann was an elementary teacher for 18 years specializing in reading and GT Programs.  She married Steve Baughman, they moved to Friendswood where they raised two sons J. and Hunter.  After retiring from teaching, Ruth Ann enjoyed volunteering in the boy's activities and sports, along with volunteering at the Friendswood Methodist Church.  Her and Steve enjoyed hosting parties and traveling.  Later in her life she was dedicated to spending all of her time with her grandchildren.

Ruth Ann is survived by her son J. Baughman, his wife Julie, and their children Tyndall and Wade Baughman of Friendswood.  Son Hunter Baughman, his fiancé Leti Evans, Archer Baughman, Calliope Frank, and Dexter Evans of Clear Lake.  Sister-in-law Carolyn Baughman.    Cousin Mona Baughman Dudley of Friendswood.  Cousins Gary and Paula Burns of Blum, TX, their daughter Lindsey and husband John Lyons and family of Aubrey, and Brandon Burns and Shauna of Round Rock and family.

Condolences may be sent to the Baughman family in care of Jeter Memorial Funeral Home at www.jeterfuneralhome.com.