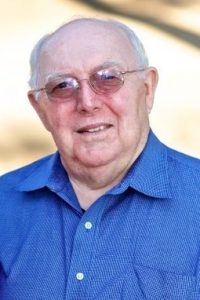 Roy C Allen Jr., of Pearland TX, passed away on Tuesday, May 18, 2021, at the age of 79. He was born June 2, 1941, in Fort Smith, Arkansas to Roy and Wanda Allen. Roy grew up in Arkansas and Ohio, where he graduated from Lakewood High School.  He attended college at Bowling Green State University earning a degree in Business Administration. After his graduation from Bowling Green, Roy was commissioned as an Ensign in the US Navy where he specialized in aviation support roles. Roy served multiple tours in the Vietnam conflict with his squadron, VF-111 Sundowners. His duty assignments included the USS Midway (CV-41) and USS Enterprise (CVN-65) while the ships were deployed in combat operations off the coast of Vietnam. He ended his active duty service in 1967 as a Lieutenant.

While serving in the Navy, Roy met and married the love of his life Patti, who he was married to for 53 years.  Roy and Patti had four children.  Following the Navy, Roy worked in the airline industry which resulted in the family moving from California to Texas.  Later in his career, Roy transitioned to working for MD Anderson Cancer Center, where he retired in 2007 after 22 years of service.

Roy enjoyed traveling, playing on his computer, planes, and everything that involved his children and grandchildren.

Celebration of life services will be held at 11:00 A.M., with the family receiving friends at 10:00 A.M., on Monday, May 24, 2021 at Jeter Memorial Funeral Home, 311 N. Friendswood Dr., Friendswood, Texas 77546, with Rev. Jerry Stark officiating. Roy will be laid to rest at a later date at the Houston National Cemetery.

Roy has asked in lieu of flowers, that donations are made to MD Anderson Cancer Center.  Donations can be made in memory of Roy at https://tinyurl.com/rallenj.

Condolences may be sent to the Allen family in care of Jeter Memorial Funeral Home at www.jeterfuneralhome.com.