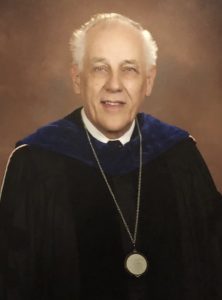 After receiving his Associate Degree from Barclay College in 1958, Ron graduated with a Bachelor of Arts Degree from George Fox College in 1960. He graduated from Asbury Theological Seminary with a Bachelor of Divinity in 1965. He received his Master of Divinity degree from Harvard Divinity School in 1967. He received his Ph. D at Princeton Theological Seminary in 1973. Bruce Manning Metzger, the translator of the New Revised Standard version of the Bible, mentored Ron while he was at Princeton.

Like his father before him, Ron pursued ministry as a career through teaching the word of God. For fifty years of his life, Ron taught all parts of the Bible, as well as Biblical Hebrew, and New Testament Greek in courses for college, masters, and doctoral students. Teaching was a passion that he shared with his wife Barbara as they lived and worked together throughout their professional lives. Together, they have taught at George Fox University, Barclay College, and Houston Graduate School of Theology (HGST).

In addition to serving as professor, Ron was the founding academic dean for HGST for twenty years. He spearheaded initial and ongoing self-study initiatives required for accreditation with the Southern Association of Colleges and Schools (SACS) and the Association of Theological Schools in the United States and Canada (ATS). Ron created course catalogs, managed registrar, faculty, and library duties, and monitored students' progress towards graduation through admissions, enrollment, and advising. When called upon, Ron also served briefly as Interim President.

Beginning in 1984, Ron actively participated in the Executive Council of the Council of Southwestern Theological Schools (COSTS), moderating faculty forums as well as serving as the organization's secretary and president. Ron's biblical class lectures have been translated into Korean for a Korean seminary with students from around the globe.

Despite his academic credentials, Ron was a humble, soft-spoken man with a deep love for educating people about the scriptures. His devotion to the Bible influenced his pastimes as well. Ron would translate scriptures from the original Hebrew and Greek into daily devotionals online.