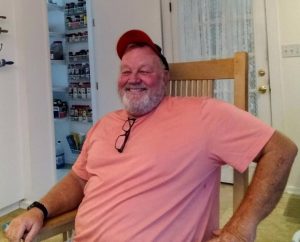 Roger Lynn Davis, 62, passed away on Tuesday, February 16, 2021. He was born on August 14, 1958, in Beaumont, TX.  He was raised in Dickinson, Tx, by parents Johnnie O'Edith Davis and Thomas A Davis. He resided in Galveston County for the majority of his life. After graduating High School at Dickinson, he went to the Fire Academy then on to a 30+ year career as a public servant.

Roger was an EMT and then a Firefighter with the Houston Fire Department. A disabling injury forced him out of the Fire Dept and into a career as a Peace Officer. During this time, he was a single father raising 3 children. Roger started with the Friendswood Police Department, later moved to the Jamaica Beach Police Dept, and ended his law enforcement career with the Galveston County Sheriff's Office. He retired and moved to Jasper, Tx in 2014. Here Roger spent most of his time doing what he really loved…cooking and spending time with his family, which included his 3 beloved dogs, Gus, Pete, and Maggie.  Roger was diagnosed with Pancreatic Cancer in January of 2020. He fought a long hard battle with his illness and passed away surrounded by his family and loved ones.

Roger is survived by his wife of 10 years, Leslie A Davis, his 3 children: Brittney K Mouton, Maegan L Canalito, and Roger T Davis, his 3 siblings: Edie Davis, Lisa Reynolds, and John Davis, his 4 grandchildren: Kennison Mouton, Karrigan Mouton, Andrew Canalito, and Alaina Canalito, and many cousins, nieces and nephews on both the Davis and Lout sides of his family.

Condolences may be sent to the Davis family in care of Jeter Memorial Funeral Home at www.jeterfuneralhome.com.