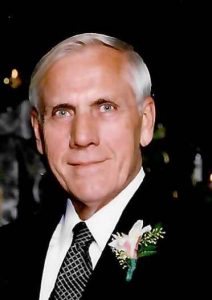 Robert J. (Bob) Embree passed away peacefully with his wife by his side at Southeast Memorial Hospital on Wednesday, June 24, 2020.  Bob was born in Clark Missouri where he spent his youth working on the family farm with his eight brothers and sisters.  He graduated from Cairo High School in Cairo, Missouri, in 1959, as the Valedictorian of his class.  He proudly served in the U.S. Army where he was deployed to Germany for three years.  He then began his distinguished career with Texaco working on the pipeline in Missouri before moving to Alvin, Texas in 1970, where he retired forty-nine years later from Texaco/Star Enterprise.

Bob enjoyed hunting, fishing, and golfing.  He was heavily involved with the Bay Area Boy Scouts of America for a number of years holding several positions where he ultimately received the Golden Mustang Award and the Silver Beaver Award, which is the highest honor given to a Volunteer in the Boy Scout's local council.  Bob also coached Little League and Alvin Softball teams and held multiple board positions even serving as President of the Alvin Girls Softball Association for several years.

Bob was preceded in death by his parents, James and Anna Embree; his brothers, James, Delbert, Donald and Dwayne Embree; and his sister Mary Smith.

He is survived by his wife of fifty years Lynne; his children Michael Stone, Kristi (Stone) Lenaburg and her husband Cary; Tara (Embree) Hobbs and her husband Kevin; his seven grandchildren Heather, Mandy and Randall Stone; Zac and Tyler Lenaburg; Keller and Rylyn Hobbs; and his four great-grandchildren Brayden Stone, Mason and Hayley Greenlee, and Bailey Settle.  He is also survived by his sisters Ruby Dillon, Betty Hess, Martha Birge and Patricia Kanatzar.

Condolences may be sent to the Embree family in care of Jeter Memorial Funeral Home at www.jeterfuneralhome.com.