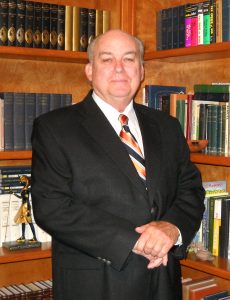 Dr. Richard Robert Klein was born in Kenosha, Wisconsin to Richard and Loraine Klein on April 17, 1943.  He was their second child but never met his sister who passed before he was born.  Richard played catcher for his high school and college baseball teams and remained an avid baseball fan for life.  He loved and cheered faithfully for the Green Bay Packers.  His family served in the grocery/bakery business for several generations and he often returned to these skills to financially support our family as he got his feet set in ministry. His grandfather Ferdinand Klein was influential in his salvation at the age of 18 and spiritual growth forward.

Richard met Roanne Behncke in his junior year in high school and she became the love of his life and #1 supporter for 59 years of marriage.  In the first 7 years of their marriage, their family expanded quickly.

Daddy Klein deeply loved and was proud of his 6 children and their love and service for Jesus.  These children include Mark Klein (who preceded him to heaven), Dr. Michael Klein, Rachel Klein Powell (and husband David), Timothy Klein (and wife Judith), Rebekah McCallay (and husband Greg), and Ruth Rupert (and husband Glenn).

Papa also deeply loved being the grandfather of his 12 precious grandchildren:  Andrew and Jared Klein, Laura Brown, Madeline and Matthew Klein, Scarlett and Grant Klein, Cameron and Alicia McCallay, and Elizabeth, Victoria, and Jonathan Rupert.  He prayed for them daily.  The final greatest joy he experienced was becoming the great-grandfather of Delaney and Peter Brown.

Pastor and Professor Klein adopted many others as spiritual family.  There was always room in his life and at his table for a new learner/disciple/spiritual friend.  Most of these were collected during his studies and service as a pastor and professor.

Dr. Klein began his education in Arkansas at the Ozark Bible Institute.  He then transferred to Pillsbury Baptist Bible College in Minnesota where he received his first degree.  In 1994, he completed his Master of Divinity at Houston Graduate School of Theology and then in 2002 he followed that with a Doctor of Ministry from Dallas Theological Seminary.

During his early ministry, Dr. Klein interned at Lakepark Chapel in Belle Chasse, Louisiana, served as a youth worker at several Houston Bible Chapels including Braeburn Bible Chapel, and as a church leader at Manvel Bible Chapel.  In 1976, he followed the Lord's leading to plant a Bible church in Alvin, Texas.  He pastored and served Alvin Bible Church (and often many Alvin residents that were not parishioners) as senior pastor for 20 years and left a thriving church when God called him on to his next layer of ministry.

At this juncture in his ministry journey, Dr. Klein felt a strong pull to higher education and the work of equipping future church leaders and became a full-time professor at the College of Biblical Studies in Houston, Texas for 12 years.    During his time as professor and following his retirement from teaching, he also filled many interim pastorates to support churches in transition.

Dr. Klein completed his official roles in ministry as the senior pastor of Family of Faith Bible Church in Manvel, Texas.  Although he paused that work after March 14, 2020 due to COVID-19 (and eventually formally retired from it) he never stopped sharing his work weekly by way of the internet through July 11, 2020.  The Lord took our precious husband, daddy, papa, pastor, professor, and friend home to Heaven on July 21, 2020.

Condolences may be sent to the Klein family in care of Jeter Memorial Home at www.jeterfuneralhome.com.