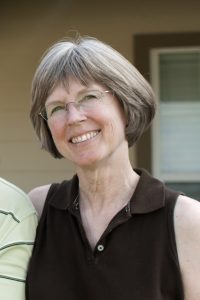 Rebecca "Becky" Annaline Golden Herder of Friendswood, Texas died on July 31, 2020, after an eight-year battle with lobular breast cancer. She is survived by her husband Richard Herder and her three daughters, Kirsta, Karen, and Liann, her daughter-in-law Sarah Dewhirst and grandson Marsley West Herder. She is also survived by her cousin Tommy Buntyn of Richardson, who was more like a brother, his wife Marylou, her sister-in-law Jeannie Martin of Victoria, and numerous nephews and nieces. Born in Yoakum on April 14, 1952, Becky was 68 years young and sharp. She was a true realist, whose wisdom and life lessons could be counted on until the end.

Over 51 years ago, Richard spotted a beautiful blonde feeding cattle in her pasture by a country road. After a short courtship, Richard asked Becky to marry him as she boarded a Greyhound bus. She, a bit dazed, responded yes. They will miss their 50th wedding anniversary on May 21, but together they have spent more than half a century learning, loving, and growing together.

Born into poverty in a small farmhouse on the Hochheim Prairie, Becky grew up never taking anything for granted. She graduated from Yoakum High School in 1970, traveled with her new husband to Austin in 1971, then to Maryland in 1972. There she gave birth to their first daughter and also acquired her Bachelor's Degree in Horticulture from the University of Maryland in 1978. Upon her return to Texas, she achieved Galveston County's Master Gardener status in 1990 and volunteered for many years at the Armand Bayou Nature Center. She freely offered her time for nine years managing concessions, uniforms, transportation and more as all three daughters marched with the Friendswood High School Mustang Band.

While her first ambition was to help grow food with the USDA, her life instead led her to become the great shepherd of the Herder family. She explored the roots and leaves of the family tree, making discoveries and solving mysteries from centuries back. She raised three firebrand daughters, allowed them the freedom to explore the world, and guided them on the footpaths of life, pointing out the poison ivy along the way. As her children brought scores of friends through her open door, she accepted each under her wing, sharing with them a warmth and enthusiasm characteristic only to a few lucky households. Her love for the true person inside each of us was endless.

Becky ensured that life around her flourished: family, friends, or Texas wildlife and wildflowers that she cultivated with great care in her yard. We must mention the menagerie of visiting opossums, skunks, raccoons, squirrels, treefrogs, toads, lizards, and birds that will miss their friendly guardian.

It was textbook Becky to think of others before thinking of herself. Her loss cannot be met in words. As she crosses the bridge between this life and beyond, she will be greeted by her beloved dogs Half-Pint, Gracious and Leia, cats Darlin' and Max, her mother Marguerite "Rita" Golden, father James Herman Golden, and grandmother "Oma" Elvira Buntyn. She will plant a garden for those who follow.

In lieu of flowers, please honor her spirit by making a donation to your local SPCA, the Nature Conservancy, Ocean Conservancy, or your local State Park. Take a walk in the woods, listen to the bees as they hum about the flowers, and remember the woman who will continue to guide our better selves.

A memorial service will be hosted at Jeter Memorial Funeral Home in Friendswood, Texas on August 22 at 2:00 in the afternoon, with visitations beginning at 1:00. Face masks are required for all in attendance. For those unable to attend in person, a livestream will be broadcast on her husband Richard's Facebook page. Becky requested that we do not mourn her by wearing black, rather that we celebrate her in bright colors and casual clothes, as if you are coming by her home to visit.

Condolences may be sent to the Herder family in care of Jeter Memorial Funeral Home at www.jeterfuneralhome.com.