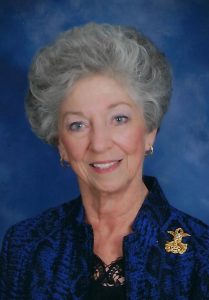 Paula Ann Roberts, age 85 an Alvin, TX resident for 56 years went to be with Jesus on Friday, June 26, 2020.  Paula was born December 27, 1934 in Houston, TX.  She was preceded in death by husband, Billy C Roberts, Sr, mother, Lurline Klein and brother, Robert Kaffenberger.

Paula grew up in the Houston Heights, where she attended Reagan High School. While attending Reagan High School, she was a member of Red Coats and she played the snare drum. A memory she held dear to her heart.

Billy moved the family to Alvin in June 1964 after taking a job at Monsanto Chocolate Bayou.  The family joined First Baptist Church of Alvin that same summer.  As a faithful member of FBC, Paula sang in the choir and taught Sunday school for 11th grade girls.  The FBC youth will best remember her for the annual summer water skiing and camping trips that were taken with her and Billy.

Paula went back to school when her sons were teenagers.  She graduated from University of Houston -Clear Lake in 1981.  She than taught 6th grade English and Creative Writing at Manvel Junior High.  She loved teaching and she made a huge impact on all her students and some became educators because of her.

Paula was a proud member of Alpha Delta Kappa (ADK), a teacher's sorority that promotes education, charitable projects, sponsors scholarships, and maintains worthy standards in the field of education.  She joined ADK in October 1985.  ADK's major benefits for Paula were the lifelong relationships she made. Paula was still a member of the retired ladies' group until her passing.

Everyone who knew and loved Paula was fully aware of her passion for singing. God gave her a beautiful voice which she served her God by singing.  She performed numerous times as a soloist for the church choir, weddings, and funerals.  Paula took great pride in singing with her boys, also.

She was also an avid sports fan.  She always made it to everyone's game especially football where she hollered for #78 as loud as she could.  By the way #78 was worn by all the men in her family.

Visitation will be held September 3, 2020 at 10am with a Memorial Service immediately following at 11am.  Services will take place at Bayou Drive Baptist Church, 612 E. Dumble Street, Alvin, TX 77511.

In lieu of flowers, donations can be made to Bayou Drive Baptist Church in memory of Paula Roberts.

Condolences may be sent to the Roberts family in care of Jeter Memorial Funeral Home at www.jeterfuneralhome.com.