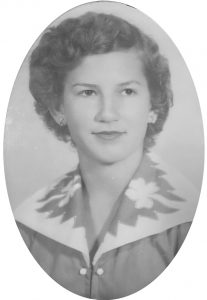 Milady Ann Klobouk Kucera went to the Lord on Easter Sunday, April 4, 2021. Milady was born on July 21, 1936 in her parents’ (Fred and Agnes Klobouk) home in Iowa Colony, Texas. She grew up in the wonderful Czech community just outside of Manvel. Her early schooling was in a small, two room school in Iowa Colony. Being a very astute student, she was moved from first grade to third grade. She went on to graduate from Alvin High School and then attended Alvin Jr. College.

Milady met the love of her life, Clarence, at a young age as he was a close neighbor. Clarence asked Milady “out” on their first date to a movie when she was 14, and the rest is history. They married on August 29, 1953 at Sacred Heart Mission, on the Scanlan Plantation. A year later, they were blessed with their first child, a son, Ricky. Three years later their daughter, Terri, was born on Father’s Day.

Milady’s zest for life shone in everything she did, from working on the farm, to teaching religion classes at Sacred Heart, to baking up one of her famous cakes for any visiting neighbor.  Anyone who came to the Kucera home, be it the feed delivery man, the cowboys working cattle or the grandkids dropping by on the weekend, she always had a complete feast before your eyes and would not hear “No, I’m not hungry.”

As a devout Catholic, religious life was very important to Milady. She prayed and said the Rosary daily. She was integral member at the Sacred Heart Mission, and one of the original members of the Sacred Heart Catholic Church.

An only child, Milady was a loving daughter to her mother. As her father passed unexpectedly, she made sure her mother’s needs were always met, and they spoke and prayed together daily.

Milady and Clarence’s love for each other was a love like no other; constant and unending. Together they have left a legacy for their children and grandchildren to love Christ and the importance of keeping your family close at heart.

In lieu of flowers, the family request donations be made to Sacred Heart of Jesus Catholic Church Manvel or Cal Farley's Boys Ranch at www.secure.calfarly.org or St. Jude Children's Hospital at www.stjude.org.

Condolences may be sent to the Kucera family in care of Jeter Funeral Home at ww.jeterfuneralhome.com.

Leave a Reply to Dennis and Cathy Doescher Cancel Reply