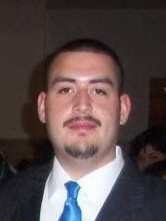 Michael Severino Salinas (Big Mike), 33, passed away unexpectedly due to complications following a major surgery.  Mike was born in Houston, Texas on February 19, 1987.  In 1994 his family moved to Friendswood, Texas where he attended school and graduated from Clear Brook High School.  He then attended San Jacinto College pursuing a 2-year associates degree.

Mike married the love of his life, Gabriela Bertoni Salinas, of League City, Texas and raising 2 beautiful children.  He loved his family.  He was very creative and smart. He enjoyed making every birthday and Christmas special and fun with the ideas he had for his kid's gifts.  Growing up, he even made his own "hallmark" cards to give to his parents.  He had a great sense of humor and was quick witted.  He would make comments that made you laugh even during stressful situations.

Until we meet again may the Lord keep you and comfort you.  As it is written, the Lord will never leave you nor forsake you – Amen

Friends are cordially invited to the visitation with the family on Friday, February 26, 2021 at 11:00 A.M. with a Mass of Christian Burial to begin at 12:00 P.M. at Mary Queen Catholic Church, 606 Cedarwood Dr., Friendswood, Texas.  Interment will follow at the Forest Park East Cemetery in Webster, Texas.

Condolences may be sent to the Salinas family in care of Jeter Memorial Funeral Home at www.jeterfuneralhome.com.

"I am the resurrection and the life. The one who believes in me will live, even though they die; and whoever lives by believing in me will never die". John 11:25-26