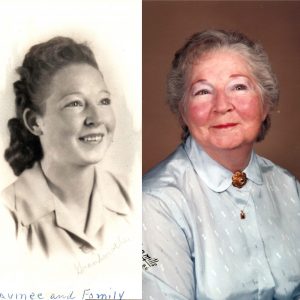 Serving as a 'Pen Pal' to US Troops in WWII, Mavinee became acquainted with Earnest Edgar Cullison (serving in the Army during WWII). Before deployment to the Europe-North African Campaign, they married on June 13, 1942. Mavinee stayed at home while Earnest completed his tour of duty. Earnest gave Mavinee the nickname "Skipper" because he couldn't remember how to pronounce or spell her first name. Earnest and Mavinee have four children, eight grandchildren, fifteen great grandchildren and one great great grandchild.

Skipper was an active member of the Lakeside Lutheran Church in League City, TX. Skipper attended Massey Business College and earned her Accounting credentials. She was involved in the American Society of Women Accountants and worked in the accounting field for most of her life. She enjoyed many years as a member of the Beta Sigma Phi Women's Sorority, serving a term as President for the local Chapter. Skipper was an avid square dancer (locally and nationally) for many years, serving a term as President of the Houston Square and Round Dance Council. For several years, Skipper served the Friendswood Chamber of Commerce and her community. In her later years, Skipper attended classes at the Harris and Galveston County's Extension Services to receive her 'Master Gardner' Certification and donated her time to supporting the horticultural events of the Harris and Galveston County's Extension Services.

Mavinee "Skipper" Russell Cullison lived a long and full life to the age of 97 when she was called home to the Lord.