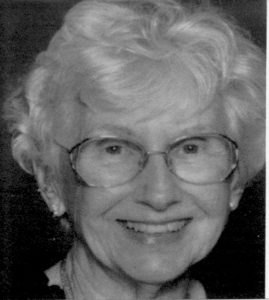 Mary Louise Evans Spencer passed peacefully to her heavenly reward on April 25, 2021 at the age of 99 in Pearland, Texas. She was born to Mary Amelia Folsom and Edward James Evans in Chicago, Illinois on January 31, 1922. Graduating from high school at 16, she enrolled at Western College, earning her BA in Fine Art, and continued her studies at Iowa State University, earning her Masters in Interior Design. During WWII, she supported the war effort working in chemical labs and later as a part of the support team for ENIAC, the first modern computer. From 1954 until 1961 she lived in Germany with her family and later travelled throughout the world.  She settled in Lakeland, Florida in 1963. In 1969, she married Samuel Haig Spencer of Lakeland.

Mary Lou was employed until her retirement as the Registrar of Florida Southern College. She was a member of First United Methodist Church, where she was active in the choir and in youth groups. She worked with LHS Band Parents and was also an active member of PEO. In their retirement she and Sam enjoyed travelling, concerts, and attending plays.  They could usually be found at the Lakeland Yacht Club buffet after church.

Mary Lou was predeceased by her parents, her brother and sister-in-law James and Reta Lou Evans, and her husband Sam.  She is survived by her son and daughter-in-law Jon and Vicki Middents of Pearland, Texas, her stepdaughter and son-in-law Mara Spencer and Ed Hogan of Clifton, Virginia, her niece Phyllis and Larry Butler, two grandchildren, Erin Leitko and Alice Middents, and three great grandchildren, Garrett and Ellie Leitko and Mariana Middents.

She will be installed in the First United Methodist Church columbarium at a later date.

Mary Lou had a long and generous life well-lived, and she will be missed by all who knew and loved her.

Condolences may be sent to the Spencer family in care of Jeter Memorial Funeral Home at www.jeterfuneralhome.com.