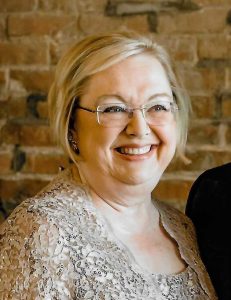 Mardi Lynn Cole Parmenter passed away on March 15, 2021. She was born on September 1, 1955 in Denver, Colorado, daughter of Harry Delano Cole Sr. and Elizabeth Jean "Betty" Miller Cole. Mardi's family moved multiple times across the US when she was a child, first as a USAF military family, and later to follow her father's work in computers. They finally settled in Friendswood, Texas when Mardi was 10 with her four younger brothers. Mardi began attending Friendswood schools in 6th grade and graduated from FHS in 1974. She so much enjoyed being the Female Lead Dresser in the musicals "Funny Girl" and "Oklahoma". It didn't hurt that her future husband, Mark Parmenter, participated in these musicals too.

Mardi and Mark started dating in 1973 and were married on December 27, 1974. They began their new life together at Keesler AFB. Their next move was to Bergstrom AFB where Mardi enrolled in nursing school after a few years. Then the Air Force sent them to Hawaii! Mardi finished her LVN certificate in Hawaii and began working at Kuakini hospital. Mardi's first child, Valerie, was born and she settled into her new role of mother. When Mark was discharged from the USAF, they moved to College Station.  Mardi began working at Bryan Hospital while Mark attended Texas A&M. She worked the med/surg floor, operating room, and emergency room all while the hospitals were sold and renamed. Sons David and Cole were born during this period.

Finally, she found her true calling with Dr. Tripathy and his staff who taught her about infusion therapy and the care of cancer patients.  After 15 years in Bryan/College Station the family moved back to Friendswood where Mardi grew up. There she began working for Dr. Ping S. Chu and fine-tuned her craft of taking care of cancer patients. After 10 years, she left and began working for Dr. Nabeel Shalan and continued caring for cancer patients until her death. She helped thousands of patients throughout her career navigate some of the worst times of their lives, all with care and compassion.

One of her great joys was working as the Camp Nurse for Camp Quality Texas from 2004-2010 where she also served on the Camp Operating Committee.  Known to all the children as "Nurse Mardi" she fixed boo-boo's and made sure all the children stayed healthy as they enjoyed themselves at camp despite having severe sickness.

Mardi was the devoted mother to her 3 children, encouraging them and participating in school activities.  Being a Band Mom was one of her favorites! Whether it was watching Valerie play the Viola in Orchestra and Musicals, attending a Play for David, or a JV Football game for Cole, she delighted in being part of the things of their life. Mardi truly enjoyed having her children around. To see the wonderment in their eyes when something new and exciting was discovered and watch them grow and become their own persons. In 2005 Mardi became "Mimi" with the birth of her grandson Connor. She enjoyed "Dinners with Mimi" when Connor was very young and never missed one of his sporting events.

A memorial service will be held at the church at 2:00 P.M. on Friday, March 26, 2021, with Rev. Matt Parker officiating. She will be laid to rest at Forest Park East Cemetery.

For those who cannot attend, services can be viewed at https://www.firstbaptistfriendswood.org/livestream"?

In lieu of flowers, please donate in her memory to Camp Quality Texas:

Condolences may be sent to the Parmenter family in care of Jeter Memorial Funeral Home at www.jeterfuneralhome.com