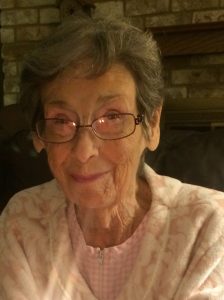 Mable Ramey Kiser of Alvin, Texas passed away on Sunday, April 26, 2020. She was born on January 16, 1930 in Houston, Texas to Bert and Effie Mae Ramey. After attending Jefferson Davis High School Mable married the love of her life, Lawrence Curtis Kiser in 1946. After three years of marriage Mable and Lawrence were blessed with a daughter, Linda, and they lived in Houston until 1965 when they moved to Huffman, Texas.  Lawrence was an independent auto mechanic and Mable was his office staff.  When the opportunity arose, Mable became the front desk person for her dear friend, Pat Schuler, at her beauty shop in Huffman. In 1983 Mable and Lawrence sold their Texas property and moved to Mountainburg, Arkansas to live near Lawrence's brother, Andrew Leroy Kiser. After seven years in the State they moved to Alvin to live with daughter Linda and her husband Charles.  Lawrence left this life in 2001 and Mable found great solace in her continuing relationship with her daughter.

Mable loved people and they loved her.  She was so kind and thoughtful.  She interacted with her grandchildren and great grandchildren in a way where they knew how much they were loved by her. Mable would do anything for anybody.  She maintained long distance relationships with friends and family all the way up until her last day of life.  Her cell phone kept her in touch.  Facebook on her iPad kept her informed of the activities of family and friends.  People were amazed when she was waiting in a doctor's office and she pulled out her iPad to read on her Kindle app.  She was an avid reader sometimes finishing a whole book in less than a day.

Mable loved to travel, and she and Lawrence went on numerous outings with their friends in the friends' motorhome.   She went on RV outings with Linda and Charles to make a host of friends in the Shiftless Sam's RV Club. She traveled to College Station in an RV to tailgate at Texas A&M games. Mable went to Las Vegas, Aspen in ski season, Disney World and multiple cruises to exotic ports and through it all she maintained a sense of adventure and a willingness to try almost anything.  As an octogenarian she rode an elephant at the Shriner's Circus in Fort Bend County with her great grandchildren. She attended football games at Texas A&M and NRG Stadium and baseball games at Minute Maid Park.  Always ready and willing to live life as it came.  She will be missed by many.

Condolences may be sent to the family in care of Jeter Memorial Funeral Home at www.jeterfuneralhome.com.