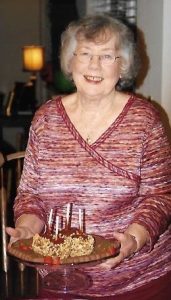 Lorraine Sutherland Burton, 88, of Friendswood, Texas passed away on November 2, 2020.  She was born on October 31, 1932 to Stanley and Hazel Sutherland in St. Louis, Missouri.

She graduated from Pasadena High School in 1951 where she met her husband, Robert Burton and they were married in 1953.   Lorraine and Bob had three children and lived in several places including New York, Alaska and Arizona before settling in the 1960's in Friendswood where they raised their family.

Lorraine graduated from nursing school in the 1970's and worked at Hermann Hospital until her retirement.  After retiring, Lorraine and Bob purchased a travel trailer and loved spending time in Colorado camping with family.   She loved gardening, cooking, scrapbooking and being an active member at the Friendswood United Methodist Church.

A private memorial service will be held at Friendswood United Methodist Church on Thursday, November 5, 2020.

Condolences may be sent to the Burton Family in care of Jeter Memorial Funeral Home @ www.jeterfuneralhome.com.