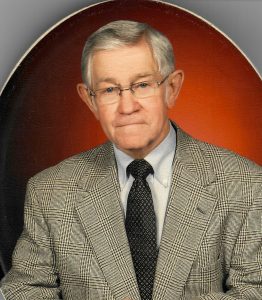 The family of Kenton Dale Harris of Friendswood announces his passing on March 9, 2021 at the age of 88.  Kenton was born in Kingman, Kansas.  He graduated from Cheney High School in Kansas where he was named an All-State running back.  He played varsity football for and graduated with a Bachelor’s degree in Physical Education from Friends University in Wichita, Kansas in 1953.  He received a Master's degree from Drake University in Des Moines, Iowa while coaching at William Penn University.

Kenton served in 868th Field Artillery Battalion in the United States Army from 1956 to 1958 and continued his career as a teacher and coach in Elkhart Kansas in 1958.   Kenton spent most of his Teaching, Coaching and Administrative career as a Friendswood Mustang in Friendswood in 1971 and retired 25 years later.  Friendswood is where Kenton and his wife Karolena (K) raised their two Children, Kevin and Kelly.  They were married for 62 beautiful years.  Kenton was a loving Dad and Papa.  He was a man of integrity and commitment and became a member of the Friendswood Friends Church in 1965.  Kenton served at the church as a Sunday school teacher, youth group leader and started and led the Fellowship of Christian Athletes at Friendswood High School. The Fellowship of Christian Athletes elected Kenton as State “Huddle Leader of the Year” in 1986.  Kenton served on and led the Ministry and Oversight committee at the Friendswood Friends Church for 10 years.

Kenton was a friend to many, a school and athletic leader and served as an example to many, many of Friendswood High School’s students and athletes.  On the field with head coach Henry Winston and as the Friendswood Mustangs’ Defensive Coordinator, Kenton helped lead the Mustangs to win the State Championship in 1973 and the Mustangs were in the Texas 2A and 3A playoffs for most of the 1970’s.  “Coach had a great influence over numerous people as he has always lived by a vigilant faith with integrity, as well as compassion and respect for others.  Over the years, many have called him their mentor.” Kenton was inducted into the Friendswood Mustang Hall of Honor and in 2015 was named a Friendswood High School Distinguished Alumni.

A memorial service will be held on Saturday, March 20, 2021 at 10:00 A.M. at the Friendswood Friends Church, 502 S. Friendswood Dr., Friendswood, Texas 77546 with Rev. David Bridges officiating. Please note that social distancing in the church and masks will be required.

In lieu of flowers, the family requests donations be made in his name to FCA.  A link to donate online is: https://my.fca.org/houstonmemorial or you can mail a check to: FCA, 8847 West Sam Houston Pkwy N, Houston, TX 77040.  Please be sure to include his name on the memo line.

Condolences may be sent to the Harris family in care of Jeter Memorial Funeral Home at www.jeterfuneralhome.com.