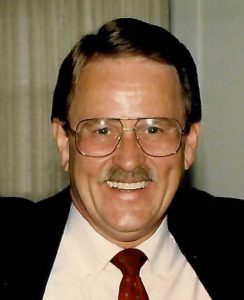 Kenneth Wayne Wick passed on to be with our Lord on December 3, 2020 from congestive heart failure.  He was born on June 10, 1937 in Houston Texas, the 2nd son of Edward and Delma Wick, of Liberty Texas.

He attended Kountze High School where he graduated in 1955, then went on to join the United States Navy, where he served honorably for 4 years, later serving as a Navy Recruiter.  He met and married Ruby Otto on Aug. 19, 1963, and lived in Pasadena, Texas, before moving in 1971, to Friendswood, Texas, the growing town he would call home from that day on.  They had 2 children, a son Kelly, and a daughter Kelsi.  Though Ruby and Ken later divorced, they raised 2 children and had an amicable parting.  While attending University of Houston studying business, he was recruited by Bob Jeffus to the job that would become his career, that of State Farm Insurance Agent.  He opened his agency in 1972, proudly serving the Friendswood community for 36 years before retiring in 2009.

While he was still with State Farm, Ken met Neva Aills and married on May 16, 2002.  They enjoyed a wonderful life together in Ken's later years as an agent, all the way into retirement.  Ken enjoyed spending time with Neva, her children, grandchildren and his kids and grandkids, woodworking, watching real-life crime dramas, taking care of his shih-tzu's Max and Murphy, and later Coco and Cookie, and of course telling stories to all who would lend an ear.

He was preceded in death by his parents, and his younger sisters Alice and Mary.

In lieu of flowers, please consider a donation to the American Heart Association at www.heart.org.

The family wishes to thank you for your condolences and prayers.  God bless us all in our time of mourning the passing of Ken.

Condolences may be sent to the Wick family in care of Jeter Memorial Funeral Home at www.jeterfuneralhome.com.