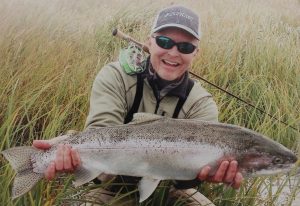 Kenneth James Gurry, Jr. passed away on July 26, 2020, at the age of 56. Jay as known to all, was born May 6, 1964 in Valdosta, Georgia to Kenneth James and Nedra Schultz Gurry. Jay was a graduate of Clear Creek High School and then a proud member of the class of 1986 at Texas A&M University. He excelled in the Corps of Cadets where he achieved the rank of Commanding Officer of Squadron 9. He was commissioned as a 2nd Lieutenant in the Texas Air National Guard and then attended Undergraduate Pilot Training in Lubbock, Texas. He served 10 years in the 111th Fighter Squadron flying F-4 Phantoms and F-16 Falcons. After his distinguished military career, Jay joined his father's company, eventually becoming President and CEO of Gurry Mechanical, LP.

Having grown up on the Gulf Coast, Jay would often be found fishing, hunting, playing tennis, and surfing- sometimes even on school days. As an adult, his passion for the outdoors and sporting not only continued, but grew.  It has been said by many that he 'never let the grass grow under his feet', and as he grew older, added more sports including skiing and scuba diving, among others.  His passion for the outdoors was passed down to all of his children, especially his son Trey, who can often be spotted in the waters of Galveston Bay.

Jay's greatest passion was his family. He prayed every day that he would be the best husband, father, son, leader, and friend that he could be to all of the people in his life, and it's safe to say that his prayers were answered! Every single thing that he did was with pure intention.

As a father, Jay made some of his most treasured memories at his weekend home in Round Top, Texas, taking trips to Galveston Island, and traveling to various destinations with his family, including his wife and best friend Kim, daughters Erika and Sydney, and son Trey. As of March, Jay had the pleasure of becoming a grandfather to his first grandchild, Ella Pearl. While his term may have been short, his family marveled at how "JJ" loved and cherished every moment with that baby girl. Also an exemplary son to Ken and Nedra, Jay could often be found on his parents porch in the country watching early morning sunrises. He never failed to set aside time for the ones he loved, and often gave the advice of "Work hard, play harder." He certainly practiced what he preached.

As a highly respected local businessman who was passionate about his community, Jay always gave back by donating his time, money, and efforts, and was an exemplary role model for his family and others.  He served as a past president of Communities in Schools, was Lunar Rendezvous King, was a Men and Women of Heart Gala honoree, charitable supporter of Bay Area Turning Point, and served as a finance chairman at his church.  He also served on boards for The Perry Family YMCA, The Clear Creek Education Foundation, and others.

Jay will be greatly missed by not only his family, but also his many friends, his business family, and community. Luckily, he left behind enough love and cherished memories to last us all a lifetime and beyond. A private service is being held in one of Jay's favorite places, Round Top, Texas.  Pastor Matthew Diehl presiding.

Condolences may be sent to the Gurry family in care of Jeter Memorial Funeral Home at www.jeterfuneralhome.com.