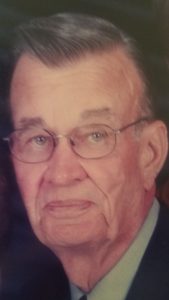 Kenneth Bayam passed from this life Wednesday, April 14, 2021 at the age of 88.  Born in Houston, Texas on March 21, 1933, Kenneth was the son of William S. Bayam and Clara Lenore Castello Bayam.  Due to his father's numerous job transfers with Humble Oil (now Exxon), Kenneth attended schools in Goose Creek and Freer in Texas; Hobbs, New Mexico; Genoa and Dickinson in Texas.  He left school in 1950 during the Korean War to join the Marine Corps.  He was stationed in Japan where he repaired the engines of fighter jets returning from Korea for the Marine Air Wing.  He returned to Texas when his father's health declined.  Shortly thereafter, he was hired by Texas-New Mexico Power Company, formerly Community Public Service Company, where he enjoyed a 40+ year career.  He began as an appliance serviceman in their Texas City office.  For many years he worked as a serviceman climbing poles and repairing whatever was needed to keep the power going to local homes and businesses.  The most trying times occurred during Hurricane Carla in September, 1961.  With the powerful storm approaching his service area, he and other service personnel worked as long as possible to keep power going to serve the community.  When the winds became too high, he and the other servicemen retreated to the elevated two-story warehouse located at 9th Street and 9th Avenue in Texas City to ride out the storm with their families.  Once the storm passed, Kenneth swam from the warehouse to his home near Highway 146 (2.8 miles) to retrieve his small boat.  He swam in dirty, infested flood waters with debris, chemicals, and wildlife.  He could see fence tops in the water below him.  He found the family dog atop the washing machine in the garage of their flooded home…a safe landing spot after swimming for an unknown length of time.  He took his boat back to the warehouse.  Kenneth piloted the various personnel who had retreated to the warehouse to their homes in numerous trips to determine the damage sustained to each family's home.  Once the flood water receded, the servicemen again worked long hours restoring power as quickly as possible to the devastated Texas City community.  On a brighter note, he also repaired and helped hang the much-loved Christmas lights that spanned 6th Street in Texas City each Christmas season for decades.  Kenneth finished his schooling after returning to Texas City and before moving to Alvin where he served, and retired, as manager of the Alvin office of Texas-New Mexico Power Company.  He was a former director of Camp Mohawk in Brazoria county and a long-time member of First United Methodist Church Alvin.

Kenneth met the love of his life, Dolores Cotton, on a blind date arranged by mutual friends shortly after leaving the Marine Corps in 1953.  They were married the following year.  He had a life-long interest in photography, guns, coins, and growing tomatoes and berries in his backyard.  He was rarely seen without a camera nearby.  He took numerous photos of everyone and everything, but there are few photos of him.  He doted on his dogs and loved chocolate candy!

He is survived by his wife of sixty-six years, Dolores; his daughter, Debra Bayam Dillon, and husband, Larry Dillon, of Fort Worth, Texas; his granddaughter, Mandy Dillon Scott, and husband, Brian Scott, of Midlothian, Texas; his grandson, Mark Dillon, and wife, Michelle Luna Dillon, of Pelican Bay, Texas; great-grandchildren, Tyler and Hayden Scott, of Midlothian, Texas as well as Serenity and Willow Dillon of Pelican Bay; and his beloved Yorkie, Sally.   He was preceded in death by his parents and his brother, Ray Bayam, and wife, Patricia Bayam. He was a member of the Texas City Masonic Lodge and Scottish Rite in Galveston.

Condolences may be sent to the Bayam family in care of Jeter Memorial Funeral Home at www.jeterfuneralhome.com