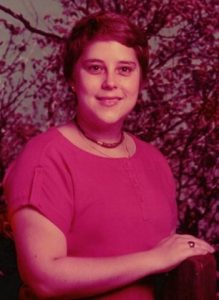 Growing up predominantly in the Houston area she graduated from Sam Houston State University in 1975 with a degree in social work and would later go on to earn an MBA from the University of Houston – Clear Lake in 1979 where she met her husband, Michael Jeffrey. They were married in 1980 and raised two sons while living in the Houston and Baton Rouge areas.

Along with her husband, friends, and family she traveled all over the world including all of North America, Western Europe, Russia and South America. She was especially proud of the fact that she climbed Machu Picchu. She was an advocate for international students, proudly hosting multiple exchange students and encouraging her own children to live abroad as well. After retiring she spent her days enjoying family, friends, grandchildren, and volunteering at Hope Village, a home for adults with intellectual and developmental challenges. She was active with the United Methodist Women group in Friendswood, Texas. She took great pride in exploring different cultures and helping those in need.

She is survived by Michael Jeffrey, her husband of 40 years, eldest son Neil Jeffrey and his wife Lauren, their two sons Jacob and Jared, younger son Galen, his wife Mary, and their twins Evelyn and Ian, her brother Brian, and mother Mary.

In lieu of flowers, the family requests you make a donation to any charity in her name.

Condolences may be sent to the Carter family in care of Jeter Memorial Funeral Home at www.jeterfuneralhome.com.