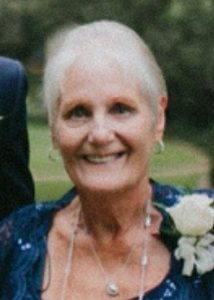 Judith Ann Renn Phillips (Judee), 79, of Friendswood Texas passed away May 16, 2020. She passed away quickly and peacefully at Memorial Hermann Southeast Hospital, taken too soon due to a new diagnosis and a short battle with cancer. Judee was born March 10, 1941 in Evanston, Illinois to parents Arthur and Lora Renn. She graduated from New Trier High School East in 1959, and then immediately set out for college. Judee attended the University of Colorado in Boulder, where she was a member of the Alpha Chi Omega Sorority.  While attending the University, she married and later had 2 daughters, Kristina and Kimberly. In 1963, Judee and her family moved to California, where she spent her time being a stay at home mom to her girls. Years later, in 1980, Judee moved to Clear Lake City, Texas, and later spent a short time in Dallas, before ultimately settling down in 1983 with her daughter Kim, in the Friendswood Texas area. She spent her early years in Friendswood working at Naturalizer Shoes meeting one of her best friends Marlene, and helping to take care of her grandkids, Jose, Brandy, and Kristy. Some of her biggest joys were picking them up for school or taking them to baseball/softball practice. She retired in 2006 and enjoyed her many hobbies. She watched Jeopardy every weekday, without fail. She loved to garden and plant and could tell you the final score of almost any college sports game that played that day. She was kind, patient and gentle. She was easy to talk to and a great listener. The "family" dogs always gravitated toward her, and to the community, she was known as "Grams". Perhaps her most notable hobby was her morning walk around the neighborhood. Rain, shine, cold, hot – it didn't matter to Judee. That was her passion, and she would not skip it. But Judee's greatest devotion was to her family. She would do anything for them and loved them with her whole heart. She loved "family time" and being with the grand kids and great great grand kids.

Judee was preceded in death by her parents Arthur and Lora, and her older brother Richard.