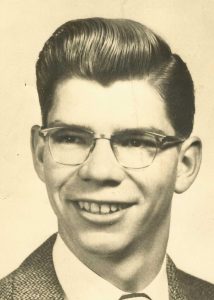 John Heiskill Roberts, III was born to John Heiskill Roberts, Jr. and Clara Ashley Roberts on September 29, 1937 in El Paso, Texas. However, shortly after his birth, his parents moved back to their hometown of Atlanta Georgia and John always considered himself "just an old country boy from Georgia", and indeed he was.

John's childhood and youth were spent moving around the various small towns that existed outside of Atlanta. All of these little places were much the same and none of them made a particular impression on him; not until the summer before he turned 17 at any rate. It was there that a couple of his new buddies invited him to the movies. They planned to escort a couple of the local young ladies but found themselves with one young lady too many and short one gentleman. Would he be interested in helping them out? He was, and shortly thereafter John found himself being introduced to a petite brunette with big blue eyes and that, as they say, was that.

John Roberts and Lynne Bush were married in Pine Lake, near Stone Mountain Georgia, on June 26, 1960. They moved to Houston, Texas where John began working with his great uncle as a Marine Surveyor. John and Lynne remained in Houston for the next 12 years working and raising their two children. In the summer of 1973, John took his family and moved them to Friendswood, Texas; a small town much like the ones he himself grew up in.

John spent the remainder of his life in Friendswood. He was an active member of Friendswood United Methodist Church, where he served in various committees over the years and involved himself in the music ministry any time he thought he might have a good chance to play his beloved harmonica and guitar. He was also a life-long member of Friendswood Masonic Lodge #1416, which he also served faithfully in many capacities, eventually attaining the honor of 33rd degree Mason.

In addition, John was involved in little league sports, assisting and coaching for his son's teams., In later years, he taught fishing in a certain little pond in League City to his grandchildren, where he passed on the love of fishing.

John H. Roberts, III passed away on May 14, 2020, and was welcomed home by his parents John and Clara, his wife Lynne, and without a doubt, a vast cloud of witnesses and angels.

In lieu of flowers, the family requests donations to be made in his memory to Yay4life at www.yay4lilfe.org.

Friends are cordially invited to the visitation with the family on Thursday, May 21, 2020 at 1:00 P.M. with the funeral service to follow at 2:00 P.M. at the Jeter Memorial Funeral Home, 311 N. Friendswood Dr., Friendswood, Texas 77546 (281) 992-7200 with Rev. Howard Huhn officiating.  Interment will follow at the Forest Park Lawndale Cemetery in Houston, Texas.

Condolences may be sent to the Roberts family in care of Jeter Memorial Funeral Home at www.jeterfuneralhome.com.