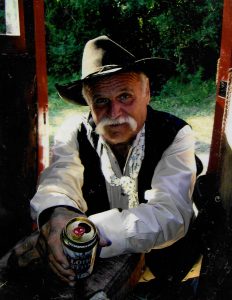 Jesse was a brick mason by trade as was his father.  He was a member of the Brick Layers Union from age 17 to 65 years old.  He was passionate about the trade.  As we all know Jess was all about a good time, so much so that in 1969 he opened his very own beer joint the J&S; right smack dab in the center of Manvel Texas. He operated his bar for 23 years and made many lifelong friends while doing so.  Jess also loved his trail rides.  He was a member of The Southern Trail Ride and Texas Independence Trail Ride Associations.  He was a founding member of the "Telephone Road Rough Riders" along with Jim Paul and Kenny Bellew.  This was his favorite pastime.  He also taught many others how to drive his team.  Jess was larger than life!

There will be a short visitation held on Monday July 6, 2020 at 10:00 A.M. with the funeral service immediately following at 11 A.M. at the Jeter Memorial Funeral Home, 311 N. Friendswood Dr, Friendswood Texas 77546 (281) 992-7200 with Rev. Jerry Stark officiating.  Interment will follow at Manvel Cemetery in Manvel Texas.  A reception will immediately follow the interment at Scopel Park.

Condolences may be sent to the Seddon family in care of Jeter Memorial Funeral Home at www.jeterfuneralhome.com