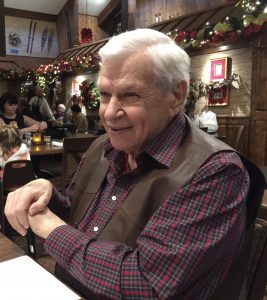 Jerry Glenn Sechler, Sr., of Pearland, passed away on April 28, 2021. He was born in West Monroe, LA on October 23, 1937. He is preceded in death by his father O.C. Sechler, mother Helen McGill Sechler, and brother Charles Sechler.

Jerry was a loving husband, father, pawpaw, brother, uncle, and friend. He was a father figure to many. He will be remembered for making a difference in the lives of those he loved and will be greatly missed by those who loved him. Jerry proudly served his country in the Army National Guard and retired from the service as a Master Sergeant. He also enjoyed a 30-year career in the US Postal Service and retired as a Superintendent of Postal Operations. Jerry and Elizabeth enjoyed working together for 10 years managing retirement facilities around the great state of Texas.

He had the unique ability to make everyone in the room feel special. His presence, warmth and humor were felt everywhere he went. The absence of his larger-than-life presence has left a gaping hole in our hearts.

We find great comfort in knowing that he is now in the arms of the One he loved to serve. No more pain and weakness for our gentle, loving giant.

Friends are cordially invited to attend a visitation with the family at 10:00 A.M., with the funeral service to begin at 11:00 A.M. on Saturday, May 1, 2021 at First Church, 1850 Broadway St., Pearland, TX 77581, with Pastor Ken Gurley officiating.  The burial will follow at Confederate Cemetery in Alvin, Tx.

Condolences may be sent to the Sechler family in care of Jeter Memorial Funeral Home at www.jeterfuneralhome.com.