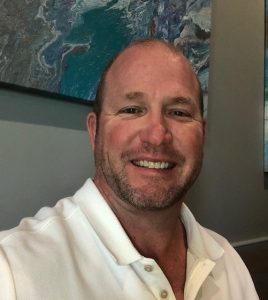 Jeffrey Lawrence Girouard, beloved husband, father, brother, son and friend, passed away on July 24, 2020.  Jeff, known to all, was born August 10, 1969 in Houston, Texas.  He was the middle son of three boys of Norman W. Girouard and Rose E. Ferguson Girouard.

Jeff was a lifelong resident of Friendswood, Texas graduating from Friendswood High School.  He went on to study business at Stephen F Austin University. Jeff graduated with a Bachelor of Business Administration in 1991.  He was a proud member of the Pi Kappa Alpha Fraternity.

Jeff and Kim were married in 1997 and celebrated 23 years of marriage in June of this year.  Jeff had many hobbies including golfing, hunting, coaching, and learning to fly.  He was actively working on getting his pilot's license.  His greatest loves were his wife and children.

Jeff lived a wonderful, beautiful life.  He was a businessman and loved wheeling and dealing to make the sale.  He was the owner of a successful business, RD Mobile Homes, for 13 years.  He was always full of energy and never met a stranger.  Jeff found the good in all people.  He was truly a genuine man.

A Celebration of Life will be held at Gateway Community Church, 760 Clear Lake City Blvd., Webster, Texas 77598 on Friday July 31, 2020 beginning at 11:00 AM with Pastor Randy Hageman officiating.