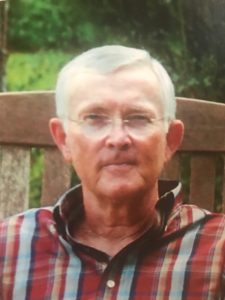 Harold was born in Freeport, Texas on January 28, 1939 to William Hewin Walling and Wilma Dykes Walling. Harold was a graduate in Mechanical Engineering of The University of Texas and received his Master's degree in Electrical Engineering from Southern Methodist University.  He was married to his childhood sweetheart, Judith Walker for fifty years.

For over 40 years Harold was a project engineer for numerous companies including Celanese Chemical, Earl and Wright and a 10-year overseas stint working for IIAPCO/Diamond Shamrock and living in Jakarta, Indonesia.

Harold devoted many hours to the Friendswood Softball Association, building fields as well as the concession stand.  He also served on the Friendswood School Board.  Harold was a lifelong supporter and fan of The University of Texas.  After retiring, he spent endless hours with volunteer work, in addition to being an avid fisherman and a certified Master Gardener.  Harold was also a loyal and dedicated member of his church, The Harbor.  There he met and married Charlsy Airington in April 2014.

Harold was preceded in death by his parents, his sister Ann, and his beloved wife of 50 years, Judith.  He is survived by his loyal and caring wife Charlsy Walling; son Hal Walling, and daughter and son in law Shannon and Layne Nutt, grandsons Kelvin Walling and William Walling, granddaughters Lauren Gavin and her husband Eric, and Lindsay Nutt, great-grandson Layne Patrick Gavin, sisters-in-law, Patricia Hindman and Kathleen Murrell, niece Paula and husband Justin Miller and  nephew, Andrew and wife Cassandra Murrell.

A private memorial service will be held at Jeter Memorial Funeral Home in Friendswood, Texas. Those wishing to honor Harold's lifelong commitment to family and community may make donations to The Harbor Compassion Fund, 2821 W. Parkwood Ave, Friendswood, TX 77546, or your favorite charity.

Condolences may be sent to the Walling family in care of Jeter Memorial Funeral Home at www.jeterfuneralhome.com.