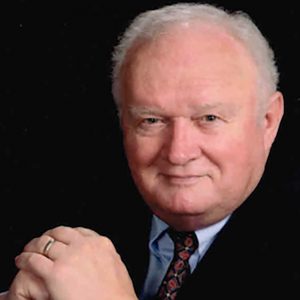 Harold "Hal" Hughes Doiron entered into eternal rest peacefully in the loving arms of his family on the 28th of April 2020. Beginning life as the eldest of five children to parents Hughes and Letha (Watkins) Doiron in the pastoral farming community of Thornwell, Louisiana, he excelled in academics, graduating as Valedictorian, and athletics, playing football, baseball and basketball. But he would say that his greatest accomplishment in these formative years was finding his lifelong partner and true love, Marilyn (Conner) Doiron in second grade. The two became sweethearts at this tender age, and later while both studying at the University of Louisiana-Lafayette, they married in June 1962, just prior to their senior year and their graduation in 1963. He graduated with highest distinction Summa Cum Laude with a Bachelor of Science in Physics and a prized offer of employment at the prestigious NASA Johnson Space Center in Houston, Texas.

He began his career in Houston at NASA while he also attended Rice University in graduate studies in Space Science, later transferring to the University of Houston and earning a Master of Science (MS) and then a Doctorate of Philosophy (PhD) in Mechanical Engineering in December of 1969, coinciding with the birth of their fourth and youngest child. During those years of graduate school, NASA gave him the assignment of developing the Apollo Lunar Module landing dynamics software that was utilized to guide the Lunar Lander gear design for toppling stability and energy absorption performance, also including landing techniques development and supporting Apollo landing site selection activities.

Along with his developing career, his deep spiritual faith was also being forged in these early years. While the family were involved members of Mary Queen Catholic Church, his scientific mind tested his true beliefs until other respected scientists shared certain divine incidents and revelations that brought him to a profound understanding and bold faith in Christ. He became a faith teacher to teens at church and participated in formative retreats such as The Walk to Emmaus and later the ACTS Retreat. He and Marilyn began a campaign to bring the Young Life organization to their town of Friendswood in the early 80's, discovering that others were also interested in starting a chapter of this non-denominational Christian youth outreach organization. They helped build the committee to raise funding for this effort and watched Young Life of Friendswood blossom into one of the most successful chapters in the U.S., making many long-term friends along this mission and further shaping his ecumenical spiritual walk. He immensely enjoyed his men's Bible study groups and had a servant's heart for exemplifying his faith in his actions, particularly exemplified in his deep and lasting friendships he nurtured with people of all beliefs, those of different religions and agnostics.

While maintaining involvement in his children's pursuits in sports, he also became a fixture of competitive tennis at the Friendswood Racquet Club, bringing his love of this sport to his children and playing competitively around Houston. He enjoyed coaching Little League baseball for his son, Michael's team. He developed a love of flying while working with crop dusters as a teen, and earned his private pilot's license in college, purchasing his first single-engine plane in Houston in his early NASA years. Once the family built a home in Friendswood in 1969, he could be found spending time with his kids at Clover Field Airport (now Pearland Regional) tinkering on the plane and taking them flying. Many family trips were taken via plane! He also loved outdoor sportsmanship, hunting, fishing and camping, and taught the children so much about science in both the wilderness and the sky on these excursions in early family life. He also enjoyed sailing, water skiing and developed a love of snow skiing in adulthood with a group of NASA colleagues. He also instilled the love of the mountains and skiing in his entire family on annual trips with other families.

Continuing projects at NASA after the Apollo program, he performed docking dynamics studies for the Skylab Program and was lead of the Space Shuttle team 1972-1979 that successfully eliminated the unstable vibration coupling that rockets experience on liftoff (named POGO instability for the rocket engine thrust oscillations that mimic the motion of a POGO stick). While pioneering the POGO suppression design field for NASA rocket engines in these early years, he continued to develop this specialty, consulting on this critical rocket design element for the Delta IV Series rockets, commercial private sector rocket development companies SpaceX, Blue Origin, Virgin Orbit and Galactic and NASA up until the last few months of his life. As one of the few original experts of this niche he found great joy in interfacing with so many brilliant young minds as he was hired to mentor young engineers and delighted in imparting this expertise to the next generation.

He was recruited away from NASA after 16 years by Reed Tool Company in 1979 for development of advanced energy exploration drilling technology as Manager of Technical Services and Systems Engineering, and Director of the Diamond Products Division where he spent 9 years until being recruited back to the space exploration industry by McDonnell Douglas Space Systems in 1988. As Senior Manager over a team that computed the on-orbit vibration response of the International Space Station for dynamic events (such as spacecraft docking, berthing, re-boost, and rocket plume impingement), they defined design limit loads and structural strength requirements. He also led a group that performed troubleshooting, root cause analysis, and flight anomaly resolution for the Space Shuttle. In 1997 he was recruited by InDyne, Inc. in the Washington, D.C. area to lead a new division in Houston for Engineering, Analysis and Testing. This role allowed for greater diversity and he immensely enjoyed leading contracts on rocket engine design, loads and dynamics consulting contracts for the Department of Defense (DoD), structural integrity analysis and improvement for aging rocket engine test stands at numerous NASA and DoD test sites, along with energy industry fluid dynamics analysis and design consulting.  He was selected as a member of NASA's Standing Review Board for the Mars Rover "Curiosity" entry, descent and landing for the six years of design development prior to its successful landing on Mars in August of 2012. Being in the Mission Control room at NASA Jet Propulsion Laboratory for this Mars Rover landing was one of many exciting opportunities in his late career, as was serving on the Hubble Space Telescope repair missions advisory board and attending numerous test launches of new commercial rockets. He relished having these opportunities to work alongside so many talented engineers and designers at these diverse companies.

After official retirement from InDyne, Inc.  in 2008, his continued consulting was both fulfilling and allowed him to spend more time traveling with Marilyn, enjoying numerous trips including "glamping" with friends in their custom camper, visiting scenic and historical sites around the world, many cruises globally and numerous road trips where they leisurely enjoyed the open road and each other's company. He always carried his laptop and could find internet connections anywhere to continue his passion for consulting while on these journeys! He also had a passion for planning side excursions to visit numerous dear friends, colleagues and relatives. His commitment to nurture these long-term relationships and visit those mentors that shaped both his career and his deep spiritual faith, relatives in his large Cajun family and professional colleagues was one of his most endearing qualities. The outpouring of visits, phone calls and letters sustained him during his last months as he peacefully accepted and bravely faced a terminal diagnosis of pancreatic cancer.

Though he has left a lasting legacy in the aerospace field, in the last decade he became equally passionate about researching and applying his years of technical experience to bring an awareness to his growing concern that current public policy regarding Anthropogenic (human caused) Global Warming (AGW) was being shaped by unvalidated climate models. His years of expertise in dynamic simulation modeling of complex systems used for safety-critical applications gave him concern that the published AGW models don't correspond with true physical data and the standard requirements of the scientific method, and this is contributing to unfounded climate alarmism. The shock of knowing that these same strict research and modeling standards that he and his NASA colleagues had held as mandatory for avoiding loss of life in space exploration were not being implemented to shape U.S. government regulations and policy on CO2 emissions. This prompted him to take action. He organized a team of Apollo, Skylab, Space Shuttle and International Space Station era physicists, engineers and astronauts to join him in a volunteer effort to conduct an objective (independent of any energy industry) assessment of AGW alarm and the reality of actual threat. He titled the team "The Right Climate Stuff" and to date they have reviewed hundreds of reports and technical papers relevant to the subject matter, discussed key issues with experts of differing opinions and published their collective findings. Though still a controversial subject, he has bravely been an outspoken voice of the motto that NASA Apollo era scientists lived by, "In God we trust. All others bring data!".  Knowing that science was on his side, he was never once deterred by negativity and personal attacks, protesters or online blasts as he has been requested to speak and present these objective independent findings at numerous national and global conferences, events and debates with notorious promoters of the opposing viewpoint. Over the last decade he has been an unpaid (remaining objective) consultant to White House staff, national farming, energy, construction and transportation organizations on the science of AGW, featured in documentaries, quoted in press articles, and his mathematical formulas for calculations cited as a renowned expert on the critical scientific view of AGW. He leaves a legacy of gathering many intelligent minds to continue to inform the public on the real science of Climate Change and AGW.

An announcement will be made for a celebration of life that will be held at a future date due to the current pandemic restrictions for gatherings.