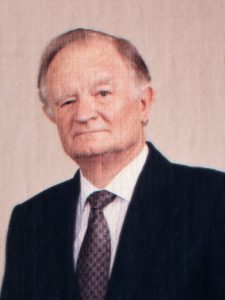 Sidney Lanier passed into the arms of his Lord on March 6, 2021 at Houston Hospice, following a brief illness. Sidney was born in Jasper, Texas, the first child of Hudnall Fisher Lanier and Tempie Smith Lanier.  He learned his strong work ethic as a child during the depression, working in his Dad and Uncle's general store.  Sidney attended and played football for Jasper High School. Following graduation he enrolled in Southwestern University in Georgetown, Texas.  When WWII broke out he felt that it was his patriotic duty to leave school, and enlist in the Navy.  After basic training Sidney was deployed to the Pacific Theatre where he remained until the end of the war.  On returning home, he again enrolled in college, this time the University of Texas in Austin, majoring in business. Sidney bled orange and dearly loved all Longhorn sports, especially football, and remained a UT supporter all his adult life.  In 1950 he married Melva Bolleter and they enjoyed almost sixty-nine years of marriage until her passing in 2019.   He also had a strong Christian faith and dearly loved his Lord.  A lifelong Methodist, he was a member of St. Luke's United Methodist Church since 1964, where he served as an usher and a Sunday school teacher for the Hines Baker class. Sidney worked for Gulf Oil, was the Civil Service Director for the City of Houston, and worked as an independent oil and gas landman.

Sidney was preceded in death by his parents, his brother John and his wife Nelda, brother-in-law Bill Holmes, the love of his life – his wife Melva, and their son Tom.

A Memorial Service will be held in the Sanctuary of St. Luke's United Methodist Church, 3471 Westheimer Road, Houston Texas, 77027, at 11:00 A.M., on Saturday, May 15, 2021, with internment to follow in the Church's Memorial Garden Columbarium.  The service will be live streamed at the following link – https://www.stlukesmethodist.org/memorial-livestream-6 .

In lieu of flowers the family requests that contributions be made to the St. Luke's Foundation, the Memorial Garden, both in care of St. Luke's or to Houston Hospice, 1905 Holcombe Blvd., Houston, Texas 77030.

Condolences may be sent to the Lanier family in care of Jeter Memorial Funeral Home at www.jeterfuneralhome.com.