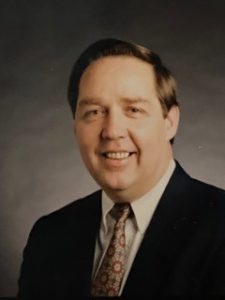 Gregory Muffitt, 76, went to eternal life on March 21, 2020 at his home in Friendswood, Texas.  He was born in Omaha, Nebraska on April 17, 1943 to parents Edward and Eleanor (MacKenzie) Muffitt and was the second of their 5 children.

He graduated high school from Maur Hill Academy in Atchison, Kansas and went on to  the University of Nebraska at Omaha and Trinity University in San Antonio, where he received his Master degree in Health Care Administration.

He met his wife Linda Flack at the University of Nebraska and they were married on February 17, 1968. Their dreams came true with the birth of a daughter and then a son.  They lived in 5 states over the years due to his changing positions in the healthcare industry. They moved to Houston 30 years ago where he joined the corporate office of Sisters of Charity. Prior to that he administered hospitals in Milwaukee, Wisconsin and Alexandria, Louisiana.

According to his daughter Melanie, he was the most intelligent person she ever met.  She will greatly miss their conversations about books, movies, politics, spirituality, philosophy, etc. His sense of humor was unmatched.

He dearly loved his father and grandfather role and was very involved with his children and grandchildren through the years, always aspiring them to be their best.  His 7 grandchildren were very special to him, and they adored "Grandpa."

He was preceded in death by his parents and his younger brother, Rick.

Greg is survived by his loving wife of 52 years, Linda: his daughter Melanie Smith (husband Brandon) and their children Cameron, Trevor, Maddie, Charlotte and Harry, and son Adam (wife Jennifer) and their children Sara and Lucy, all of Friendswood. Survivors also include 3 sisters whom he adored: Sandra Hunt of Granada Hills, California, Valerie Vaughan of Omaha, Nebraska and Melanie Boharski of Liberty Lake, Washington and many nieces, nephews and dear friends.

Due to the health concerns at the present time, a memorial service will be held at a later date.