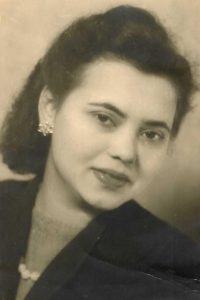 Gertrude was born on September 25, 1920, in Bindjei, Indonesia to Margaret Christine Herklots and William Theodoor Wijnmalen.  She moved to the Netherlands with her parents in her late teens and was living there during the German Occupation in World War II.   After the war she returned to Indonesia where she met and married her husband Lucas Verkerk on December 5, 1947.

In 1960 the family immigrated to the United States and lived in Cambridge, MA for several years.  After moving to Tewksbury, MA, Phoenix AZ, and Washington Township, NJ, the family finally settled down in Houston, TX.   Gertrude applied for and became an American Citizen on June 26, 1967.   Gertrude was divorced from Lucas on August 29, 1980, after several years of estrangement.

Gertrude, who was known as "Oma" to all in the family, was a sweet and kind hearted women.  She raised her five children mostly by herself and was a devoted mother and follower of Christ.  Her Dutch and Indonesian cooking was a delight to all the family. She enjoyed her Baskin Robbins Ice Cream and Dutch treats.  She loved family and enjoyed family get togethers, trips up to visit her daughter in OKC, and holiday and birthday celebrations at her eldest son's home in Pearland.

Gertrude is survived by her son and his wife, Hendrik and Sylvia Verkerk of Pearland, TX, her son and his wife, Willem and Jane Verkerk of Missouri City, TX, her son, Eric Verkerk of Trinity, Tx, her daughter and her husband, Helga Marion and Patrick Fleming of Norman, OKC, and her son, Simon Peter of Houston Tx.   Gertrude is also survived by 9 grandchildren: Nikki Stahl, Paul, Patrick, and Joey Fleming, April Jackson, Emily Schnitzer, Josh Verkerk, Elle Armstrong, and Simon Verkerk.  She is also survived by 15 great grandchildren, Ava and Sam Stahl, Trinity and Falyn Fleming, Coleman, Westly, Parker, and Finley Fleming, Ashley, Alex, and Andrew Copeland, Nathan, Callie and Jake Jackson and Evie Schnitzer.

A celebration of her Life will be held at 11:00 A.M. on Saturday, May 15, 2021, at Jeter Memorial Funeral Home, 311 N. Friendswood Drive, Friendswood, TX 77546 (281)992-7200, with Rev. Rex Forsyth of Sagemont Church officiating.  All friends and family are welcome to attend.  Anyone wishing to sign the online guestbook, share memories, or issue condolences to the family may do so at www.jeterfuneralhome.com. The family asked in lieu of flowers donations be made in Gertrude's memory to the Dementia society.org