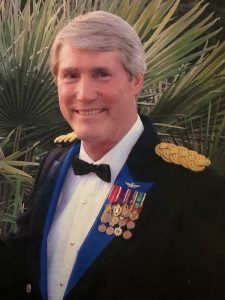 Our country lost a true American this week.  Gerald L. (Jerry) Ericsson passed away after a valiant battle with pancreatic cancer on September 4, 2020.  Visitation hours are from 5-7 PM on Friday, September 11, 2020 at Jeter Memorial Funeral Home in Friendswood.  Memorial services will be led by Pastor Ralph Hobratschk of Hope Lutheran Church and held at Stevenson Park in Friendswood on Saturday, September 12, 2020 at 10:30 AM.  The interment ceremony with full Military Honors will be held at Arlington National Cemetery in Arlington, Virginia.

Jerry served two tours as a helicopter pilot in the Vietnam War and was a two-time Purple Heart recipient, among many other commendations.  He served in The Rattlers as Rattler 19 and as Firebird 94 from July 1968 to July 1969.  Those who were there at the time know of his Chicken Plate which saved him from a bullet to the heart.  His service continued with a second tour in Vietnam from November 1971 through November 1972.

"A part-time hero and all-around good guy," Jerry was a man of great integrity and honor.  As a storyteller, Jerry never met a stranger.  He was well-liked, admired and respected by all those who had the honor to know him and serve under his command.  He is dearly missed, but his stories will live on…

Condolences may be sent to the Ericsson family in care of Jeter Memorial Funeral Home at www.jeterfuneralhome.com.