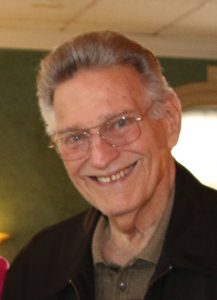 Frank J Descant Jr, age 78, passed away on Thursday November 26, 2020 after years of battling multiple health issues.  He was born at St Joseph's Hospital in Houston in 1942, the oldest child of Frank J Descant Sr and Anne Patricia Descant, nee McElgunn.  He attended Blessed Sacrament School, St Thomas High School, and the University of Houston.  While attending U of H and working at Woolworths in Palm Center, he met the love of his life, Ann Marie Malik, and they were married in 1964 at St Peter the Apostle Catholic Church.  Frank and Ann lived in Houston and eventually moved to Friendswood in 1976.  He was a locomotive engineer on the Santa Fe Railroad for 31 years and retired in 2004.  In retirement he enjoyed visiting his cousins in County Fermanagh, Northern Ireland, volunteering for the Knights of Columbus fish fries at Mary Queen Catholic Church, and helping the retired priests of the Archdiocese of Galveston-Houston.

He was preceded in death by his parents, his sister Cheryl Kistner, and his brother Donald Descant.

He is survived by his wife Ann, his children Frank III and wife Andrea of New Orleans, Shannon Larson and husband Jeff of Friendswood, John and wife Mei of Houston, and Steven and wife Jennifer of Kyle, TX, eleven grandchildren, four great-grandchildren, his brother Michael and wife Louise Descant, his sister-in-law Doris Descant, and numerous cousins, nieces, nephews, and in-laws.

A Memorial Mass will be for immediate family only due to COVID concerns and public celebration will be held at a later date.

In lieu of flowers, please consider a donation to Casa Juan Diego in memory of Frank.

The family would like to thank all those who cared for Frank over the past few years, especially Fresenius Kidney Care in Pearland, Apostle Home Health, and Tuscany Village Skilled Nursing Center.