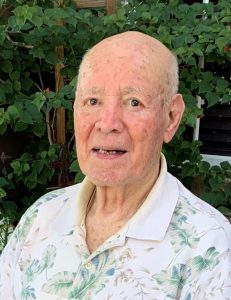 Frank Garza, 87, of Friendswood, TX. passed away on Sunday, August 30, 2020.  Frank was born on April 2, 1933 in Goliad, TX.  Frank and his 4 siblings were the children of Amador Garza and Elvira Barrera.  Frank grew up in San Diego, TX. where he attended 12 years of school.  He met his wife, Carlotta Valerio, in high school.  They were engaged on her high school graduation day and were married on June 26, 1955.  Frank enlisted in the United States Air Force and served his time at Bangor Air Force base in Maine.  After the Air Force, Frank and Carlotta move back to San Diego, TX. where they started a family.  They had 3 children, David Garza of Houston, TX. Danny Garza of Houston, TX. and Linda Smith and her husband Mark of Friendswood, TX.  Survivors also include 4 grandchildren, Anthony Garza, Nick Garza, Scott Smith and Sam Smith and 3 great grandchildren, Lilianna Garza, Jasmine Garza, and Noah Garza.

Frank began his career in 1957 with the General Electric Company in Corpus Christi, TX.  He began his employment as a truck driver.  He then quickly became a valuable resource in the office and was promoted to Bookkeeper.  Soon afterwards, he became a salesman for their large motor and turbine repair business.  Frank's success in sales resulted in a promotion to Houston, TX. where he continued to succeed.  Frank then became Regional Sales Manager and was then promoted to International Sales Manager.  Frank balanced his work career with his family and civics life.  Frank and Carlotta stressed the importance of Christian morals and reverence with his children which they value today.  Frank joined the Catholic religious organization, The Knights of Columbus to serve his community and was a member of the Fourth Degree Assemblies.  "Sir Knight" is more than a title, it was an honor.  Frank also made time to participate in his children's life by coaching his son's baseball teams and softball with his daughter.  Frank was also responsible for teaching his sons the outdoor life through Boy Scouts, ranching, hunting, and fishing.  Frank spent time volunteering on the International Committee for the Houston Livestock Show and Rodeo where he became a life member, was President of their neighborhood home owners association for several years and was a member of the Keep Friendswood Beautiful Committee for many years.  In retirement, Frank enjoyed his time with his children, grandchildren, and great grandchildren.

Frank was deeply loved and respected by all who knew him, the perfect role model as a Christian, Husband, Father, Grandfather and Great Grandfather.

Condolences may be sent to the Garza family in care of Jeter Memorial Funeral Home at www.jeterfuneralhome.com.

9 thoughts on “Frank B. Garza”