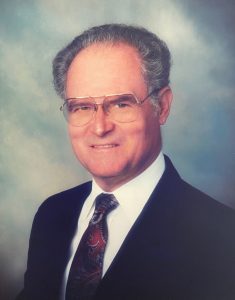 Floyd Neri Brown, Jr. was born on August 3, 1927 to Floyd N. Brown, Sr. and Lettie Avitts Brown in the small community of Hastings, TX.  He was the eldest of 6 children—Floyd Jr., Ona Mae, Jamie, Carmie, Connie and Stanley.  As a child, Floyd Jr. enjoyed nature and living on the family farm.  After attending early grade school in Alvin, his family moved to Friendswood so they could worship at the Friends Church.  In 1936, he was thrown from a horse (riding bareback) while helping a neighbor, severely breaking his right leg.  After a year of hospitalization and home convalescence, his father took him to a revival meeting in Houston.  By his faith in God, his leg miraculously was healed.  Even though the bone healed, it limited his participation in football.  His desire to be on the team got him the position—water boy.

Floyd Sr., as a 1940s member of FISD School Board, donated live oak trees for the school grounds.  Floyd Jr. helped his father plant these around the school building.  Those beautiful live oak trees still line the street in front of the old school.

As a Quaker, he served his country during the Korean War as a Conscientious Objector working at the State Hospital in San Antonio for 2 years, where Cheryl and Jamie were both born.  Upon returning to Friendswood, Ronnie was born.  Floyd worked at Hughes Tool on the third shift while attending University of Houston to earn his Texas teachers' certification.  He also served as a charter member of Friendswood Volunteer Fire Department.

Throughout his career, Floyd held various leadership positions for FISD.  Twice, he volunteered to be an unpaid band director–later teaching band, choir, public school music and numerous other classes for 9 years (1958-1967).  By then, he had earned his Master's degree.  He served as Acting Superintendent (spring 1967) and Junior High Principal for 9 more years (1967-1976).  He later enjoyed serving on FISD's Board of Education for 6 years.  He retired early from FISD, forming Brown Associates to assist elderly relatives with estate management needs.

A lifelong Quaker, Floyd was dedicated to Friendswood Friends Church (FFC) and often led the congregation in singing hymns, with Margie usually playing the organ or piano, during worship services.  Throughout his 92 years, he held many leadership roles, including Presiding Clerk, and served on various committees.  As FFC Cemetery Administrator through the years, he measured plots for funerals of many long-time Quakers.  In addition, he spent countless hours setting up and maintaining the church sound equipment and recorded hundreds of church services, funerals and weddings using reel-to-reel, cassette and CD recorders.  He also drove buses for school and volunteered as a bus driver picking up kids for Sunday School and church.

After riding horses as a kid, Floyd's first motorcycle was a 1930s-era Harley, which was followed by a 1940s-era Harley he rode with his brothers.  While attending college in Kansas, he received his private pilot license.  He flew various tail-dragger and tricycle landing gear aircraft.  Taking metal shop classes in college, he learned to weld and was a knowledgeable mechanic and electrician.  He could run, operate and repair just about anything, including tractors, bulldozers, backhoes, etc.

One of Floyd's proudest accomplishments, other than his wonderful family, was when he and Margie celebrated their 70th wedding anniversary last December with their extended family.  Floyd was known as "Pa" and Margie is "Mimi" to all the immediate family and more.  Pa and Mimi had much patience with kids, spending a lot of extra time on projects—explaining to kids and including them in their many adventures.  For nearly 40 years, they generously dedicated themselves to sharing their love, faith, education and music with their grandkids.

Floyd had a servant's heart and lived his life being respectful of others.  He was honored for his achievements as a Distinguished FISD Alum in 2009, representing the Character Counts "Trait of Respect".  In his humble way, he was most proud of this award.  He cared about educating the children of Friendswood and was dedicated to providing service to his community.  Floyd and Margie were pleased to maintain friendships with many of their childhood friends, church friends, former students, fellow school administrators and teachers, as well as welcoming new friends moving into our community as it quickly grew.  The family appreciates the visits of many friends and relatives the past few years.

Floyd was predeceased by his parents; father- and mother-in-law Ransom and Mildred Glines; brothers Jamie and Carmie; sister-in-law Lois Jean Glines Brown; brother-in-law Myron Worden; and beloved son Jamie.  Floyd was the Patriarch of the Brown family and coordinated many reunions with a host of almost 100 relatives every 4 years.  He leaves a legacy of devotion to the Lord, family and the Friendswood community.

For a long time, Floyd N. Brown, Jr. has been ready for the Lord to take him Home.  He quietly passed into Heaven on Good Friday, April 10, 2020.  He fought a good fight, finished his course and kept the faith (II Timothy 4:11).  His family rejoices that he was with God on glorious Easter Sunday!

When in the long-term care facility for 1-1/2 years, Floyd had many visitors, young and old.  These were cherished moments that kept him going.  Amongst them all, one of the most appropriate and funniest stories was when Greg Jeter came for a visit.  Greg rounded the corner and walked through the doorway.  Floyd quickly and pointedly asked "Well, Greg, are you here for me?"  (pause)  Yes, Greg, he was ready.  Dust-to-dust, ashes-to-ashes.

The family especially thanks Wes Brown for his loving care and assistance to Pa and Mimi this past year.  We appreciate the caring staff at Friendship Haven in Friendswood, as well as the staff and sitters of Home Instead who were so helpful to Floyd and Margie these past few years.  We are grateful for the compassionate staff in the Emergency Room at Clear Lake Hospital and the kind 6th floor nurses who cared for Pa in his last hours.