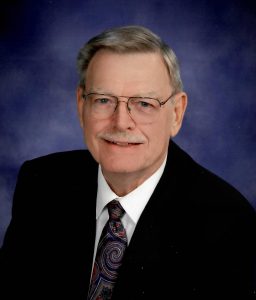 Richard L. Bramblett, Ph.D. passed away on October 27, 2020 from metastatic prostate cancer.  He lived a long, accomplished, and successful life.  He was strong but gentle, firm but kind, a good friend and a loving husband, father, grandfather, and great-grandfather.

Richard was born in Dallas Texas on August 15, 1935 to James Erwin Bramblett and Lois Lucille Roe Bramblett.  He graduated from Pharr-San Juan Alamo High school at the top of his class and entered Rice University in 1952 at the age of 17.  He was awarded a Bachelors, Masters and Doctorate in Physics, the last in 1960 when he has 24.  He was a member of the Phi Beta Kappa society.

He married Mary Lynn Hall on June 3, 1957 and their oldest son, Edward was born on June 4, 1960, the day before he received his Doctorate.  The family moved to Livermore, California shortly after and he began his career at Lawrence Livermore Laboratory, a joint venture of the Department of Defense and the University of California. Mary Lynn had earned her R.N. in Houston and worked until their younger son, Thomas was born on August 19,1962.  They were also blessed with a daughter, Debra on October 21, 1966.

Richard left Livermore in 1968 for San Diego, California to work for Gulf General Atomic.  Eventually, he and a group of co-workers brought their division private and created IRT Corporation, a nuclear instrumentation and services company that created testing machines including reactor control rod systems and a high speed letter bomb detector used at the Pentagon.

Richard moved to Largo, Florida, in 1994 to work with Martin Marietta Specialty Components.  He referred to that job as "Teaching them how to beat swords into plowshares."

After several years in Largo, Richard moved back to Houston and worked with a friend and former coworker from San Diego at Applied Physics & Measurements, Inc. a nuclear instrumentation company.  He referred to that job as "When you don't want to dig up the barrel but need to know what's in it."

Richard's college research is still relevant.  His Master's thesis was instrumental in developing radiation therapies for cancer.  His Doctoral thesis become the international standard for the measurement of Gamma radiation

Before he retired fully in 2012, he created a real estate investment company that has been successful in providing single family homes for rent in the local area.

While a lifelong scientist, Richard enjoyed many activities.  He was an avid bridge player and his home often was filled with laughter, competition, and good food.  He enjoyed fishing and learned to Scuba dive for abalone and lobster.  He played hand ball, racquet ball and also swam for fitness.  He took his family camping every Thanksgiving, Easter, and summer.  Many of those driving trips were from California to Texas and Louisiana to visit family with stops at National Parks and famous places.  He bought a boat for fishing and took up water skiing at 47 years old.  He maintained a photographic collection of all of those trips and every significant event for his family throughout the years.

Richard was a family man.  He kept close contact with his relatives and was an excellent father. He was proud of the accomplishments of his children Edward L. Bramblett, J.D., Thomas R. Bramblett, Ph.D. and Debra E. Bramblett, Ph.D.  He enjoyed long friendships and was a good neighbor.  He served as President of the Coward's Creek Homeowner's Association for two years.

Richard was preceded in death by his parents James and Lois and his wife Mary Lynn.  He is survived by his wife, Gloria, her son, Eric and wife Tassa, his son Edward and wife Vickie, his son, Thomas and wife Reena, his daughter, Debra and her husband, Ken.  He also is survived by Edward's son Michael and wife Khloud, their daughters, Talia, Layanah, and Norah, Edward's daughter Kaitlyn and husband, Brad, Thomas' sons, William and Daniel, and Vickie's daughter Ashley, and husband Josh.

For those who are so inclined, the family suggests that memorial donations could be made to, American Cancer Society at https://www.cancer.org/involved/donat/memorial-giving.html or to Cancer Research Institute at https://www.cancerresearch.org/join-the-cause/donate/one-time-donation or Rice University at https://riceconnect.rice.edu/giving and select the Brown School of Engineering General Support or by mail to Rice University, Office of Development MS-81, P.O. Box 1892, Houston, Texas 77251-1892 (he received BS,MS and PhD in Physics from Rice)

Be sure to indicate that the gift is to memorialize Dr. Richard L. Bramblett and that acknowledgement should be sent to Debra E. Bramblett at 2901 Capistrano Ave., Las Cruces, NM 88011.

Condolences may be sent to the Bramblett family in care of Jeter Memorial Funeral Home at www.jeterfuneralhome.com.