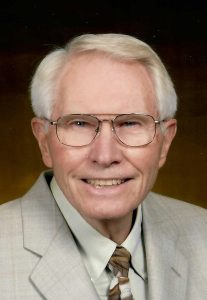 Monte was born Easter Sunday, April 12, 1936 to Ray and Lucille Moore of Henrietta, TX.   Upon graduation from high school, he moved to Austin to attend the University of Texas.  He bled burnt orange and was an avid Longhorn fan.  After 3 years at UT, he was accepted into the University of Texas Dental Branch in Houston.  During his senior year, Monte was elected to the OKU honor fraternity for academic excellence and was the recipient of the Mosby Book Award.  During his junior year of dental school, a lifetime of good fortune came his way in meeting Patsy Gray and 5 months later they were married.  Thus, was the beginning of a life of love and togetherness.

Upon graduation from UTDB, Monte joined the Air Force and served 2 years in Biloxi, MS in the Dental Corps.  After discharge, he, Patsy and Lisa moved to Houston and Monte entered dental practice with Patsy's father, Dr. Murry G. Gray.  They practiced in Houston for a number of years before moving to the Clear Lake area.  His son Michael joined the practice in 1997 which gave Monte a great sense of joy and pride.

Monte was a devout Christian man and loved to spread the word of the Good News in all that he did.  He loved to talk Scripture with anyone and everyone.

Monte's most cherished asset was his family as he loved his involvement with children and grandchildren.  He coached baseball and soccer for Michael's teams for several years.   His was totally involved with Lisa in the Friendswood Wranglerettes and was part of the Booster Club being organized.  He followed his grandson Andrew in Little League and basketball through high school.  He attended Anna's soccer games again through high school.  He followed Rachel as a Friendswood cheerleader.  Amy took him to gymnastic competitions and also to many high school games as a cheerleader.  He was so proud of his family and his favorite times were spending time with them.

He and Patsy joined FUMC in 1972, after which Monte served on numerous committees.  He also was an active member of Harrisburg Rotary, ultimately receiving a Paul Harris Fellow designation.  He was a member of the Bay Area Emmaus community and served as a board member for several years.

Monte and Patsy were perfect partners.  They had fun just being together and, in fact, were always together.  They loved traveling and explored Europe on many trips as well as throughout the U.S.  Some of their best times were fishing together in Colorado as Monte mastered the craft of trout fishing.  Monte baited and cast, Patsy caught, Monte cleaned, and they fed a multitude of friends and family at their cabin in Pagosa Springs.

One of Monte's great passions was military history.  Together he and Patsy toured countless Civil War battlefields and attended many symposiums regarding the war.  He was an authority on WWII. He was once asked 3 times by a docent at the WWII Museum in New Orleans to "help him out" when he stumbled on information when leading a tour group.  His great trip was a WWII trip through Normandy and The Battle of the Bulge areas.  He knew all about these battles and was thrilled to walk in the footsteps of the heroes of these battles.  He read and had enough books to fill an entire library section of WWII history.  He never tired of learning more.