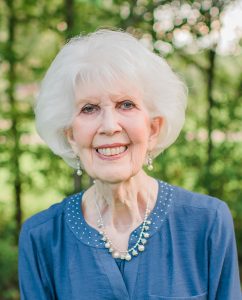 Dorothy "Jean" Komarek was called home to be with her Lord and Savior, Jesus Christ, on April 3, 2020. She was born on August 22, 1936 in Malone, NY to parents Arthur and Leota Bruso. She was the 3rd of 7 children and lived in Malone for 8 years before moving to Corpus Christi, TX.

It was in Corpus that she met and married her beloved husband, Frank Komarek. They later moved to Houston, TX before settling down in Pasadena, TX. They were married for 47 years until he was called home to heaven in 2000.

There will be much rejoicing there as she is reunited with her precious loved ones who preceded her in death. These include her parents and husband, as well as her siblings: Joseph Bruso, N. Gwen Winkler, Sylvia Marie "Babe" Liston, Arthur Jr. Bruso, Elizabeth Bruso, and her son-in-law James Bradford "Brad" Garren as well as many other relatives and friends.

Jean loved the Lord, and she was active at Sagemont Church while her health allowed. She volunteered at the church bookstore and, over the years, she and Frank were involved in many ministries, including Helping Hands and Lost Sheep Ministries.

She loved to sew and even made her children's clothes as they grew up. She also enjoyed cooking and always made her home a welcoming place. She took care of many of her grandchildren during the 1980s and 1990s as well as caring for her own mother in her time of need. She was, at her core, a caregiver to many.

Jean loved shopping and reading and knew how to enjoy a good cup of coffee. She was very sharp and clever and enjoyed lengthy discussions on many topics. She loved to stay informed and could hold her own in any conversation. She enjoyed time at Lake Livingston and mostly enjoyed time with her family and friends. She also enjoyed the company of her sweetheart, Bob, for over a decade.

Jean was the loving matriarch of her family. She loved her children, grandchildren and great grandchildren deeply. Those whom she leaves behind will miss her greatly.

She is survived by her brother, Robert Bruso, and his wife Velma, as well as her sister-in-law Mary Bruso. She is also survived by her daughters and their spouses: Julie and Gary Belcik; Jeanie Garren; Cathy and John Danna; and Carol and Paul Dial, as well as her grandchildren and their families: Matthew Belcik, his wife Jennifer, and their children Nolan and Rhys; Jeremy Garren; Jennifer Harrup, her husband Kris, and their children Phoenix and Lincoln; Michael Belcik, his wife Courtney, and their son Henry; and Audrey and Evan Dial.

She is also survived by her sweetheart, Bob Hinkson, along with a host of nieces and nephews and many friends.

Jean's immediate family will gather for a private graveside service at Forest Lawn Cemetery in Houston, TX.  Due to current circumstances, a memorial service for her will be announced at a later date.