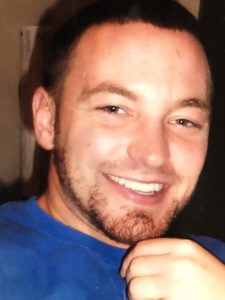 Dennis Wayne Stephens, 35, beloved father, son, and friend, passed away suddenly from cardiac arrest on the afternoon of January 9, 2021. While Dennis left this world too soon, his larger-than-life persona, trademark smile, and sparkling blue eyes will never be forgotten.

Dennis was born in Pasadena, Texas, on September 4, 1985. In 2004, he graduated from Alvin High School, where he excelled in athletics and discovered his love of pasture parties, hunting, a well-made fire, and of course, the ladies. His college career was short-lived: after a handful of days in school, Dennis determined that he could learn far more from living and developing personal relationships than he ever could from textbooks. And he was right.

Dennis was a people person with an unparalleled zest for life. He was the type of man that could strike up a conversation with anyone, any age, any ethnicity or in any holding cell. With Dennis, “more was always better.” He lived 1000 years in the 35 calendar years we had with him because he attacked life; Dennis wasn’t just the life of the party—he was the party.

Although a less than average life span, Dennis did not live an average life. He traveled where he wanted to travel, laughed inappropriately at every chance, watched what he wanted to watch, and loved who he wanted to love. He was a rare combination of someone who had a love of life and a firm understanding of what was important—the simplicity of living a life with those you love. Dennis cherished his family, but nothing brought him more joy than spending time with his daughter, Chloe. He loved her with every fiber of his being.

A self-proclaimed mama’s boy, Dennis wore his heart on his sleeve and was generous to a fault. He was introspective and sensitive, known to cry at the drop of a hat. It was not unusual for Dennis to begin weeping as he entered church. What brought him to tears remains a mystery—whether it was his debilitating anxiety or the possible revelation of past indiscretions—no one dared to ask.

Yet, Dennis had few regrets. He often said that it is best to live life without looking back—not just because “the cops are always in my rear-view mirror”—but because Dennis understood and appreciated the silver linings of life.

Dennis was most proud of being a father, his near-perfect recall of Aaron Lewis song lyrics, and his ability to make those around him feel better when they were feeling their worse. His passions included fishing, watching football (particularly the Texans and Longhorns), playing Madden with his friends, and making Chloe laugh. He also really loved crawfish and his dog, Colt.

Without a doubt, our world is a smaller place today without Dennis. Dennis did not change the world forcibly, but he affected many people in it. He lightened them with his gentle heart. He brought them joy through his infectious smile—a smile that thankfully was passed down to his daughter.

Dennis was predeceased by his maternal grandfather, Donald R. Watson, and his paternal grandparents, Virginia and Joe E. Stephens.

Condolences may be sent to the Stephens family in care of of Jeter Memorial Funeral Home at www.jeterfuneralhome.com.